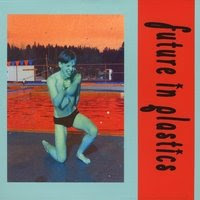 Future In Plastics sets course for a post-punk, stream of consciousness lyrical style that fits their energetic yet unfocused musical compositions. Imagine Living Color crossed with the B-52's and you have an idea of the sound promulgated by Future In Plastics. This is great music to slam dance to, otherwise it's a bit hollow. Dead Sea Rolls includes some interesting guitar work, but is lyrical babble. Better Living Through Chemistry opens with one of the best bass riff's this side of La Via Strangiato, but otherwise falls prey to its own disorganization. Death Valley similarly has difficulties, although its infectious beat makes it very danceable.

Future In Plastics is a young band. They remind me something of a group of guys I went to high school with who put out an album back in the early 1990's to no fanfare and smaller sales. After struggling for years in the Indie scene they've built a solid reputation and a side gig as Graham Parker's backing band. They're called The Figgs when playing their own material. Future In Plastics show some of the same talent and tendencies of the early Figgs material. Whether they follow the same path depends a great deal on perseverance (and a little luck).

You can learn more about Future In Plastics at www.myspace.com/futureinplastics. You can purchase the EP at www.cdbaby.com/inplastics3.