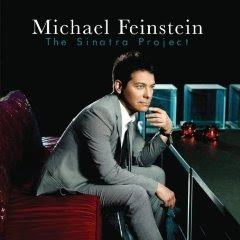 Frank Sinatra is a legend. He never had the greatest voice in popular music, but he was a showman par excellence. There was no one in Sinatra's time (and perhaps no one even today) who could sell a song like Frank. His conviction and delivery were perfect every time, even in his elder days. For this reason any sort of tribute to Sinatra brings big risks for an artist. Get it right and you will be lauded, but miss a beat and there are millions of Sinatra fans and pundits there to tell you when, where and how many times you fell off the Sinatra pedestal. Michael Feinstein has been making great music for years and certainly has the sort of resume required to try a tribute. Now we have The Sinatra Project from Feinstein, released in September, 2008 by Concord Music.

Feinstein chooses some Sinatra classics but also mixes in some lesser known tunes. He wisely avoids songs that have become iconic (My Way, Come Fly With Me), but gamely tries to bring the sort of energy and delivery that Sinatra embodied. Depending on how you look it The Sinatra Project is either an unbridled success or a fair attempt. If you're looking for someone to recreate the magic of Sinatra, then this isn't it. I'm afraid there might not be anyone in popular music that can do that. If you're looking for a faithful reading of Sinatra tunes that tries to capture the zeitgeist without trying to BE Sinatra, then this is a great album.

Feinstein has some real moments here. All My Tomorrows/All The Way seems to allow Feinstein to capture that Sinatra magic for a few minutes, and may be the most inspired tune on the disc. The Song Is You is another highlight and captures some of the Vegas-era swing that Sinatra personified. The Same Hello, The Same Goodbye was a pleasant surprise as well. Other highlights include Begin The Beguine; I've Got A Crush On You; You Go To My Head and At Long Last Love.

Michael Feinstein isn't Frank Sinatra, but is a capable singer who manages to catch some of the Sinatra sizzle at points throughout The Sinatra Project. His orchestra is top-notch and the arrangements are perfect. Fans of Frank Sinatra will enjoy this, but if you haven't heard him play, I'd refer you to Frank first to get acquainted. The Sinatra Project is a strong recording and one that should do well for Michael Feinstein. Frank would approve.

You can learn more about Michael Feinstein at http://www.michaelfeinstein.com/. You can purchase a copy of The Sinatra Project through Amazon.com or through most major music retailers.
Posted by Wildy at 5:10 AM