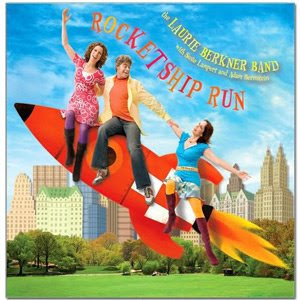 Laurie Berkner is the most popular children's artist in the United States for one reason: she's real. Berkner has an ability to speak to children in her music without condescending to them, all while making music that parents enjoy as well. The Laurie Berkner Band's 2006 DVD (We Are...The Laurie Berkner Band) sold 4 million copies if you need a gauge of success. Laurie Berkner released Rocketship Run in August, 2008, her first CD of new material in six years. The disc contains 20 songs developed with Adam Bernstein and Susie Lampert (The Laurie Berkner Band), and should maintain Berkner's status as the Madonna of the kindergarten set.

Laurie Berkner started out as an elementary school who moonlighted as an alt-rocker. Putting her two diverging professional paths together turns out to have been sheer genius as she has achieved success far beyond what she might have imagined at the beginning. Rocketship Run mixes folk, rock, ska, blues, conga, samba and even an Irish jig to create a musical stew that is vibrant and varied. The kiddies will be able to sing along with this disc in no time (as is usually true with Berkner CDs), and you'll soon know the album front to back from continuous replays.

Highlights include the title track, Rocketship Run, which has already been featured in a Noggin video. Other great tracks include Mouse In My Toolbox, Jump and Fly, Pigbasket, Winter Lullaby and Fast And Slow (The Rabbit And The Turtle). As always Berkner's voice is pleasant and full of light. Rocketship Run continues Berkner's very appealing and intelligent children's albums. Our kids love her, yours will too.

You can learn more about Laurie Berkner at http://www.laurieberkner.com/. You can purchase Rocketship Run through a link of Berkner’s website, or at major music retailers such as WalMart, Barnes and Noble and Target.
Posted by Wildy at 5:10 AM