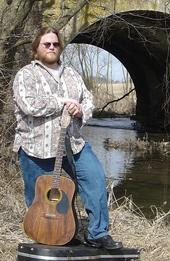 Todd Lorenz is an acoustic based singer/songwriter whose musical ancestry lies in blues, rock, folk and bluegrass. The native of Southern California has made his was to Monroe, WI by way of Phoenix but has continued to make music and play out whenever possible. After releasing 5 solo albums and fronting several Southern California bands, Lorenz has set a new goal for himself in 2008. Between January 14, 2008 and January 12, 2009 he will post one new song each week to his website, http://www.toddlorenz.com/. These songs will be available for free download, and will later be available for sale on 4 CDs, each of which will represent one quarter of a year. The project is called Twenty Aught Eight, and volumes 1 and 2 will be available shortly.

Twenty Aught Eight is an acoustic project made up primarily of Todd Lorenz and his guitar. One would expect that the pressure of releasing one song per week would create a barrier to strong, consistent songwriting, but the recorded evidence is quite to the contrary. Twenty Aught Eight V.1 and V.2 contain consistently strong songwriting and plus performances from Todd Lorenz.

Volume One opens with Three Chords And The Truth, with Lorenz sounding a little like Johnny Cash. This song is quite catchy and stays with you after the CD is over. Rock Me has a rockin' blues feel to it, again as if done by Johnny Cash. Trouble No More may well be the class of Volume 1, and could be a bit of a working class anthem. Moonbeams is a lovely country/folk instrumental ballad. Other highlights include The Meanderin Hound; Ain't No Greater Sorrow; Beauty Of Our Lives and Lost In Pain.

Volume Two includes the powerful anti-war song Bring 'Em Home. The message here is a hammer that comes across in sometimes awkward, sometimes oblique fashion. It's not as poetic as you might expect in a song, but lyrically is perhaps closer to actual thoughts than the finessed word could capture. Next up is perhaps the best song from the first two volumes of Twenty Aught Eight - Walk On By. Other highlights include Perfect Pleasures; Talkin' 'Bout It; Leave A Light On; Two Step and Soothe My Soul.

Todd Lorenz isn't the prettiest voice in music. His lower register sounds very much like Johnny Cash. His upper register is idiosyncratic and unique. Whatever flaws exist in his voice make him more interesting and listenable rather than detracting from the musical experience. The song quality is in general lower than you might expect from Lorenz just becauseof the volume, but he finds some real gems along the way. I liken this to being given a look inside an artist's sketchbook where the failures have been given equal opportunity alongside potential masterpieces. Lorenz bravely offers up a years worth of catalogue in what becomes a study in the process of composition and creation. Todd Lorenz is a unique and brave artist who warrants further attention. The Twenty Aught Eight project is highly recommended listening, and is as fine example of the raw creative process as we've had the pleasure to hear here at Wildy's World.

You can learn more about Todd Lorenz at http://www.toddlorenz.com/; where you can download his weekly offerings from the Twenty Aught Eight project for free, or purchase CDs of previously released Twenty Aught Eight songs in the not too distant future.
Posted by Wildy at 5:00 AM