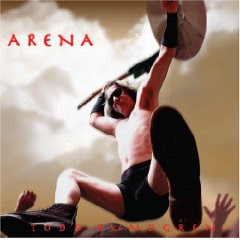 Todd Rundgren has been doing this a long, long time. Album after album of original material has come and gone to various levels of critical and commercial success. In that time he has taken in a load of influences and on Arena appears ready to give some of them back to us. Writing tunes that sound like Yes, Pink Floyd and AC/DC in addition to some classic Rundgren stylings, Arena is a shockingly good album.

Mad opens Arena sounding like a Big Generator-era Yes tune, while Afraid sounds like Lawrence Gowan-era Styx. Gun opens with a great bass hook and is a fairly typical classic rock radio song. This is currently my favorite song on Arena. Courage is the sort of song that was FM Radio gold back in the 1970's and early 1980's. Strike sounds like an AC/DC tune, with Rundgren mimicking Angus Young on the chorus. It's a lot of fun to listen to. Other highlights include Today, Mountaintop and Panic.

Todd Rundgren is always full of surprises, and Arena is no exception to the trend. Longtime fans will love this collection, and I wouldn't be 100% surprised if Rundgren attracts some newer, young ears into his cadre. Job well done.

You can learn more about Todd Rundgren at http://www.tr-i.com/. Arena will be available on September 30th, 2008 through most major music retailers, including Amazon.com.
Posted by Wildy at 5:05 AM

I dig your review This is a no compromise album from one of rock's true renegades and innovators. Todd has always been two steps ahead of the rest of the pack, always challenging himself with new music genres. "Strike" and "Mountaintop" will probably put him at the forefront of guitar rock and roll, and why not. Vocally and lyrically the man is a genius. This is an angry album for angry people who look to rock and roll as a salvation. And yes, I guess Todd is the savoir. It couldnt happen to a nicer guy. The man still hasn't even been inuducted into the Rock and Roll Hall of Fame. Arena rocks!!

Arena is like a continuation of Side 2 of the Faithful album. It's "Black In White" with Devil Horns. Turn it up, Todd, turn it up!!!

Is it live or is it Memorex (or Rock N Roll Train)?

You got it! Rundgren is the Appropriator - if he's fascinated with it - he will incorporate it.