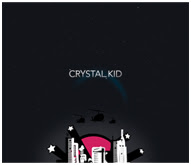 Crystal Kid is brothers Frank and Charles Torrealba. The Calgary, Alberta duo grew up in Brazil and has spent time traveling the Americas; along the way they have been influenced by a multitude of sounds and styles. Crystal Kid released their six song self-titled EP in 2008 and have been touring in its support.

Lead vocalist Frank Torrealba is strong and vibrant song who is instantly recognizable as a front man. The songwriting on Crystal Kid is strong and the performances energetic and engaging. Come Dance is a driving rock tune vaguely reminiscent of The Tragically Hip. Sorry is a bit fluffier but still substantial. Don't Slow Me Down would be the class of the album, with In A Little While a very close second if it weren't for The Distance Between Us, which is the sort of song that songwriters buy mansions with. Drive is the big guitar rock tune that could put Crystal Kid on the map of Modern Rock stations, and would have strong commercial success with the right placement.

Viscerally, Crystal Kid is a surprisingly good rock band. On first listen I was pleasantly surprised but not terribly moved -- as I listened more I started to realize just how talented these brothers are. I shudder to make the obvious reference, but this is the sort of music the Gallagher brothers (Oasis) set out to make but got too caught up in themselves to complete. With the right breaks, Crystal Kid could be that kind of band.