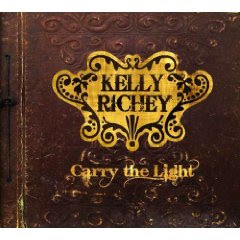 Kelly Richey’s guitar playing has been compared to the likes of Jimi Hendrix and Stevie Ray Vaughan. Kelly Richey and her band have also earned a reputation for unforgettable, high energy shows. Her latest release, Carry The Light carries on the sound that Richey is known for.

Carry The Light opens with Leave The Blues Behind, a tasty blues rocker that serves as a great introduction to Kelly Richey for those who have not heard her before. I Want You is another strong entry, sounding like something that might have come from an old Led Zeppelin album. I also particularly enjoyed Run Like Hell and Carry The Light. The highlight of Carry The Light is No More Lies. Richey sounds a bit like Melissa Etheridge on this song, which rocks like nobody's business.

Carry The Light is a great entry in the Blues/Rock universe. Kelly Richey has created a sonic pleasure that should endure the passage of time and provide several crowd pleasers to her live performances for years to come.
Rating: 3.5 Stars (Out of 5)

You can learn more about Kelly Richey at http://www.kellyricheyband.com/. You can purchase a copy of Carry The Light at Sweet Lucy Records.
Posted by Wildy at 5:10 AM