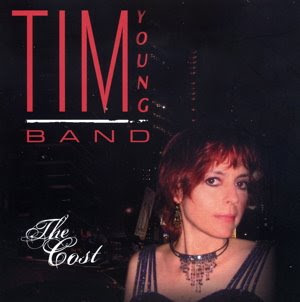 Tim Young Band is the house band at Manhattan's Vintage Bar & Restaurant, after recent extended gigs at Club Siberia & Bellevue Bar. The Tim Young Band plays a clean brand of acoustic rock with Americana influences that is perfect for the dinner and early evening set. The Cost is a mellow classic rock album with strong songwriting and tight arrangements. It's not feel good music per se, but you'll feel good listening to it.

Tim Young started out as a solo performer and had the band grow around him beginning in 2002 when he released his debut album No Stranger. Young is an everyman performer who appeals to the working set and the business set equally. His music is a little too straightforward for significant radio play in today's fractured and micro-controlled media market, but it's a great listen that's family friendly and worth taking the time for. Highlights include The Cost, Kerouac, Drifting Cowboy and Hanging In. My personal favorite is Remember which has a roots rock feel and recounts an early date at a Nirvana concert.

Tim Young Band's The Cost is a strong effort and a pleasant listen. It's not going to knock your socks off, but it's a steady record you'll find yourself returning to from time to time. Good stuff.
Rating: 3 Stars (Out of 5)

You can learn more about Tim Young Band at http://www.timrocksweb.com/. You can purchase a copy of The Cost at www.cdbaby.com/cd/timyoung3.
Posted by Wildy at 5:10 AM