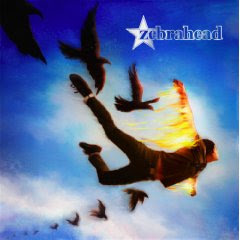 Zebrahead was something of a pioneer of rock/rap conglomeration, choosing this mix rather than the reggae-rock preferred by most other SoCal bands of that time. The band has maintained a strong presence on the national music scene and won significant critical praise. Zebrahead has also managed in that time to build a respectable, rabid following of fans. 2008 sees the release of Phoenix. A rebirth it is.

Phoenix is post-punk/pop nirvana. Zebrahead maintains the vivacity of early Green Day with great big hooks and power pop choruses. Mental Health is a potential smash hit, as is Hell Yeah! Death By Disco has a bit of that Beastie Boys machismo in the verse before resolving into a great rock and roll chorus reminiscent of 1980's rock and roll. Other highlights include Ignite; The Junkie And The Halo; Brixton and Two Wrongs Don't Make A Right, But Three Rights Make a Left.

Zebrahead rocks out on Phoenix. Phoenix is reminder of how much fun rock and roll can be. There's no pretension or false humility here, just good old fashioned blow out the speakers playing. Zebrahead has been doing this for quite some time without losing the energy and life they brought to their first record. That's rare in a band, and shows that Zebrahead love what they do just as much now as then they first started out. Phoenix is a must-hear.

You can learn more about Zebrahead at http://www.zebrahead.tv/, where you can purchase a copy of Phoenix. You can also find Phoenix at most major music retailers.
Posted by Wildy at 5:05 AM