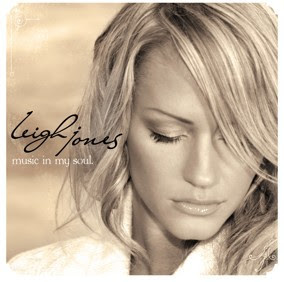 Leigh Jones has big friends and supporters. The Southern California native has managed to impress both Berry Gordy (Motown founder) and Al Bell (Stax Records) that she has something special. That’s no small potatoes in the world of Soul and R&B music. This high school classmate of Josh Groban has the world at her feet musically, and the potential to make it hers. Her debut album Music In My Soul was released on September 9, 2008.

Music In My Soul is something of a creative Pangaea. On the one hand you have wonderfully written songs such as the bluesy I'm Leavin' You, the gorgeous Free Fall, the jazzy Sick Of Fools and the cabaret tune Goodbye. Jones shines on these tunes as smoky-voiced alto with a beautiful sound. Leigh Jones' vocals soar on Music In My Soul, making good songs great and even partially rescuing some of the lesser material. A few songs don't work as well for Jones, including Words You Never Say (You rip me open like a Hostess Cupcake / down to the creamy filling). Aside from being one of the most unintentionally funny lyrics in pop music in a decade, this song is more of a venue for Jones to engage in coloratura runs and drop Shakespeare references than to sing.

Singing is what Leigh Jones does well, and it's markedly clear that with the right material she can be downright mesmerizing. Music In My Soul is uneven with some songs that are definite keepers and some that would be best left behind. Jones herself makes a fair effort on all the songs here, but some are just not savable. Leigh Jones is an ample talent with a bright future. We here at Wildy's World hope to hear more from her in the future.

You can learn more about Leigh Jones at www.myspace.com/leighjonesmusic. You can purchase a copy of Music In My Soul at Amazon.com and most major music retailers.