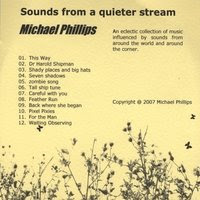 Michael Phillips is a musician and movie maker from South London. Sounds From A Quieter Stream, his 2007 release, is a collection of eclectic guitar based tunes you have to hear.

Sounds From A Quieter Stream is firmly in the bare-bones singer/songwriter tradition. The majority of songs on Sounds From A Quieter Stream are just Phillips and his guitar. I found the songwriting to be quirky and offbeat, and perhaps just a bit young. Phillips tells stories that are straightforward and sometimes humorous, but lacking finesse and succinctness. There is a slight whine to Phillips' singing that is reminiscent of Michael Stipe. I am not sure if this is natural or vocal style, but it made it more difficult to listen to the disc.

As a guitar player Phillips is quite talented, and he is a strong writer when it comes to the music itself. Check out Shady Places And Big Hats as a prime example of what I am talking about. Other highlights include Seven Shadows, Tall Ship Tune and Waiting Observing.

Michael Phillips is quite talented as a guitar player and composer. I'm not a huge fan of his lyrical style or his voice, although the latter is purely a matter of taste and I entirely invite you to discount my opinion on that point. Sounds From A Quieter Stream has its highs and lows, but the highs are very much worth hearing.

You can learn more about Michael Phillips at www.myspace.com/electrifyingpans. You can purchase Sounds From A Quieter Stream at www.cdbaby.com/cd/phillipsm.