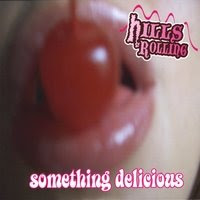 Hills Rolling (aka multi-instrumentalist Trey McGriff) has a way of insinuating his music into your mind. There's something catchy and edgy about his sound that sticks around your subconscious and yells, "Boo!" every so often. This Mississippi born and bred Atlanta resident has had quite the couple of years. He's gained sponsorship from Jagermeister, gained exposure through MTV's Real World - Denver, XM Satellite Radio, NPR and various Comcast channels. He's also opened for the likes of Journey, Foreigner, Paul Rogers, Molly Hatchet, Slightly Stoopid and Kenny Wayne Sheppard. Now comes the latest infectious release from Hills Rolling, Something Delicious.

Something Serious has a very familiar sound and feel to it. It's a comfortable disc but not a groundbreaking one. I Wake Up opens Something Delicious with a driving acoustic rock sound that resolves into an ethereal bridge to nowhere. I Need It sounds a bit like the Foo Fighters playing a Beatles tune. I rather enjoyed After All These Years. This is probably the most commercial tune on Something Delicious, but lyrically comes across as slightly sophomoric. Tearing You Up Inside is the class of the album and may be the best song McGriff has written to date. Perfect Escape closes out the set with driving electric guitar and is reminiscent of the good days of Collective Soul.

On the whole Something Delicious is a decent album. Hills Rolling has some good press out there and I expected to be blown away upon listening to this. It didn't happen, but it's a good rock album with a few weak spots and some great musical moments. Something Delicious is the sort of music you keep around for an occasional snack. I don't see it being a regular item on the menu but once in a while you'll just have to hear it.

You can learn more about Hills Rolling at www.myspace.com/hillsrolling or http://www.whiskeychild.com/. You can pick up a copy of Something Delicious at www.cdbaby.com/cd/hillsrolling2.
Posted by Wildy at 5:05 AM