CD Review: Kristoffer Ragnstam - Wrong Side Of The Room 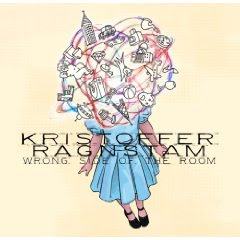 There is no brief explanation for Kristoffer Ragnstam. Soundbites can't capture the glorious oddity he is in the rock world. This native of Sweden has been all around the world and is at home most anywhere he goes. He's been called the Swedish Beck, but even this might be selling him short. Kristoffer Ragnstam may be the most esoteric and original songwriter of his generation. Building on that resume is 2008's Wrong Side Of The Room, written primarily on tour with Debbie Harry in 2007, or from material developed on that tour.

Whether it's the detached dementia of Stop On Top, the surreal Heard About My Own Death On The Radio, the new wave 2008 or the guilded machismo of the title track, Kristoffer Ragnstam holds court in a world of musical glee. High energy experimental rock is the beginning of a description, but doesn't get to the heart of the dichotomy Ragnstam creates between functional melodies and deconstructionist composition. I found myself in awe listening to Wrong Side Of The Room.

Kristoffer Ragnstam is a special talent. His ability to consume musical styles and sounds, digest them and the recast them as something new and original with an air of familiarity is rare but not unheard of. The inventive genius he shows in constructing songs from found musical flotsam and jetsam is the rarest of musical gifts. Wrong Side Of The Room is a rock and roll cornucopia, and a Wildy's World Certified Desert Island Disc. Dig in.

You can learn more about Kristoffer Ragnstam at http://www.ragnstam.se/ or www.myspace.com/ragnstam. You can purchase a copy of Wrong Side Of The Room at Amazon.com.
Posted by Wildy at 5:10 AM

i love kristoffer ragnstam. his new album is great!

This album is so amazing! I love it more each time I listen. Not to mention, he is so cute!