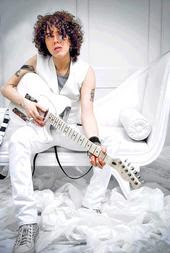 L.P. has generated a lot of positive publicity to date, in part due to a lot of push from her record label. The question becomes whether the buzz is for real or whether it's just ground noise intended to sell records. Wildy's World was provided with a four song sampler from her upcoming album decide for ourselves. The outlook is mixed.

L.P. has a voice that is reminiscent of Cyndi Lauper at times, with a sultry, pouty sound in the lower register and an upper register that's just a bit rough. It's not a pretty voice, but an interesting and enjoyable one. The material on the preview is up and down. Good With You is a fairly prototypical alt-rock ballad that is listenable but doesn't really distinguish L.P. from the open market. Cling To Me is a little more interesting, with electronic versions of baroque instruments on the opening and throughout the song. Kill The Pain is generic pop rock song that again, is pleasant, but does little to distinguish L.P. in the marketplace. SMF will garner attention as it steps back to a slightly more acoustic approach, and because it firmly qualifies the album for a Parental Advisory sticker.

SMF is actually a decent song. While I have no objection to the use of profanity in principle, I think how it is used (or overused) can detract from a message. SMF (Stupid Mother------) is a bit gratuitous and repetitive, giving the impression that the point is the shock value rather than the story behind the words. I obviously can't tell about the rest of the album from four songs, but I don't get L.P. as a strong entry into the market. L.P. has a voice that should do well for her, but the material is average at best, and the sound is just a little too much like so many other things already in the marketplace.

You can learn more about L.P. at www.myspace.com/lprock. You can currently purchase the single Good With You on iTunes.