CD Review: Laws Of Attraction - Where I Belong 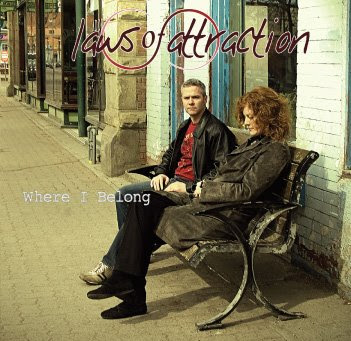 Laws Of Attraction - Where I Belong
2008, LOA Music

Laws Of Attraction is Laurene Palmiere and Scott Dionne, a Calgary based duo with a bent for passionate country. Hailing from Campbell River, BC and Halifax, NS, respectively, the duo traveled a long distance just to find one another. Their debut album Where I Belong is a treat.

I have to start by saying I love Laws Of Attraction's sound. Vocalist Laurene Palmiere has an amazing, lush sound, and the songs are well written. This is mellow country all the way. The sound is a bit generic for pop-country, but it's a pleasant listen. Where I Belong opens with The Road I Left Behind, which shows off great organ and guitar work and a strong backing band. I'll Wait opens with a guitar hook that is very similar to the one that opens The Waltons' Middle Of Nowhere. I don't know if this were intentional or not, but it made a neat connection between Laws of Attraction and The Waltons (Jason Plumb).

Letting Me Go is almost soulful, right down to the swanky violins. The absolute highlight of Where I Belong is Talk Away The Night. This is a potential major hit for Laws Of Attraction (as always) with the right breaks. Other highlights include These Days, Where I Belong and Courage.

Laws Of Attraction has a nice easy sound. They hearken back to 1980's country a bit, where melancholy and a more mellow sound predominated. I think Where I Belong may have a difficult time garnering significant attention from radio, as their sound is a little mellow for the ADD tendencies of the day, but songs like Talk Away The Night will always find a niche. As long as Laws Of Attraction can continue to write and perform songs of this quality, they'll have a following for however long they keep making music.

You can learn more about Laws Of Attraction and purchase a copy of Where I Belong at http://www.lawsofattractionmusic.com/. If you are purely of the digital age you may download individual tracks or the entire album though iTunes.
Posted by Wildy at 5:00 AM