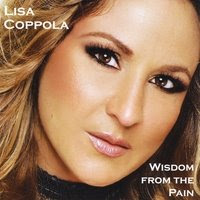 Lisa Coppola - Wisdom From The Pain
2008, Any Other Name Music

New Jersey's own Lisa Coppola has already managed to make her mark on the music business in several ways. From being featured in Billy Joel's All About Soul video and singing backup for him on Saturday Night Live, to performing background vocalist duties for the likes of Marshall Crenshaw, John Eddie, Glen Burtnick (Styx) and Mitch Malloy, Coppola is a known commodity. Her latest EP, Wisdom From The Pain was released recently and is a strong declaration of her Nashville intentions. Lisa Coppola is an Indie Artist whose name you should know.

The disc opens with When You Were Mine. Penned by John Waite and Anthony Krizan (The Spin Doctors), When You Were Mine is a perfect country/adult contemporary tune that I would not be surprised to hear licensed in the near future. This song could be competitive on the country music charts with the right publicity or break. Temporary Heartache is a country/blues hybrid with real appeal. This might be the most commercially viable song on the disc, and it sure is a fun listen.

Your Love Is Like A Rodeo is the most purely country tune on the disc. It almost sounds like Coppola changed her voice somewhat on this song to fit that country mold. This is almost a mistake as it takes Coppola out of her sound, but she's such a good vocalist that she pulls it off. Wisdom From The Pain is a country ballad full of regret and is quite touching. This is another song I wouldn't be surprised to hear licensed, although I would suggest it's not as radio-friendly as a couple of other tracks here. The EP closes with Make This Moment (To Love Again). I actually didn't enjoy this track much. Once again it sounds like Coppola changes her voice to fit the song, rather than making the song her own, and this time it doesn't work as well. I think that ultimately this song is just plain weaker than the rest of the material on Wisdom From The Pain.

So in the end we have an EP that is 3/5 stupendous, 1/5 good, and 1/5 I didn’t enjoy. That's a pretty good ratio overall. Wisdom From The Pain is a strong indication not only of the talent of Lisa Coppola, but also the weaknesses she may succumb to from time to time. On the whole definitely a worthwhile listen. I would not be surprised if Coppola ascends the mountain that is Nashville one of these days and declares it her own.
Rating: 3.5 Stars (Out of 5)

You can learn more about Lisa Coppola at http://www.lisacoppola.com/. You can purchase a copy of Wisdom From The Pain at www.cdbaby.com/cd/coppola2.
Posted by Wildy at 5:57 AM