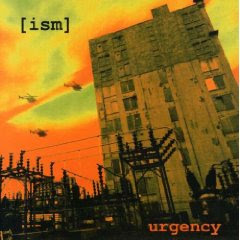 ISM is one of the many great bands to emerge from New York City's eclectic and vibrant rock scene. ISM has undergone a metamorphosis in the past year, uncovering a deep well of great new material. The result is Urgency, a must-hear CD.

ISM sounds like a Zooropa era U2 spinoff. Vocalist Andre Mistier even sounds a great deal like Bono at times. The music is a mix of pop/rock with the some electronic shading. Urgency is a classic rock song with a dance beat that is contrapuntal to the depressed/morose lead vocals on the verses. The refrain lifts the song up to flight level before falling off the precipice to Robert Smith style malaise. Give It Back is a little more driven and thoroughly enjoyable. The anthemic Fly might be the highlight of the album.

Other highlights include The Only One, the beautifully disturbing Ash And Rose and Postlude. ISM carries the same distant swagger about it that many of the great rock bands have. There's just enough of a depressive neurosis about the album to inspire a new generation of new wave fanatics, and the music is energetic and wild enough to make the transformation into techno dance mixes a real plausibility. Urgency is the anti-commercial commercial album you've been waiting for, if you're into such things.
Rating: 3.5 Stars (Out of 5)

You can learn more about ISM at www.myspace.com/ism. You can pick up a copy of Urgency at Amazon.com.
Posted by Wildy at 5:05 AM