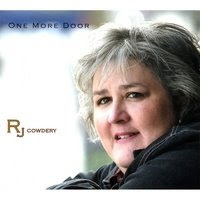 RJ Cowdery is a darling of the US Folk Music circuit. Based on Columbus, Ohio, Cowdery broke through in the mid-1990's. Life got in the way for a few years, but in 2007 she returned with the critically acclaimed One More Door. The album itself was recorded live with members of Public Radio's Mountain Stage band. The Todd Burge produced album features Don Dixon on bass, who has previously produced artists such as R.E.M., Marti Jones, Kim Carnes, Hootie & The Blowfish and Marshall Crenshaw, amongst others.

Cowdery has a very straight-forward voice with just a hint of country twang. There is a plain beauty in her singing that is instantly recognizable and constantly subdued in the words she sings. The album opens with These Ties That Bind, showing how the gifts of filial love become the promise of our tomorrows. This song has a great melody and great hooks and could easily play to both pop and country audiences (think Indigo Girls at the top of their game with a country accent). One More Door is a regretful look back at lovers who've gone their separate ways.

State Of Mine has the chance to be a real country hit. It's a "don't let the door hit you on the way out" sort of a song, and couches its frustration in wit ("It's a matter of time and a little bit of wine / that keeps me feeling fine in this state of mind"). It's a thinking person's get lost song. Now And Then is a sweet recollection of youth and is sure to be a long time concert favorite for RJ Cowdery. Other highlights include Too Fast, There She Goes and Hold On.

RJ Cowdery is likely to be much appreciated to anyone who actually hears her. She's managed to be lauded at Folk Festivals including the Rocky Mountain Folks Festival; the Folk Alliance Official Showcase and Falcon Ridge. One More Door is a quintessential American folk album, and has several songs that will fit nicely into The Great American Songbook. If folk, country or singer-songwriter genres appeal to you then One More Door is essential listening. If you're looking to broaden your horizons into one of those areas then this is a great place to start.
Rating: 4.5 Stars (Out of 5)

You can learn more about RJ Cowdery at http://www.rjcowdery.com/. You can pick up a copy of One More Door at www.cdbaby.com/rjcowdery2.
Posted by Wildy at 5:00 AM