CD Review: The South - You Are Here 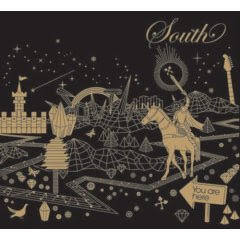 The South - You Are Here
2008, Bluehammock Music

Classy Brit-Pop isn't dead after all. South's 4th album, You Are Here is a breath of fresh air amongst all of the post-punk pulp that masquerades as modern rock. The South manages to make music that is firmly routed in the styles of disparate influences while embracing a modern edge. Shades of The Moody Blues, The Kinks, Badly Drawn Boy, and The Beatles waltz through You Are Here and hang out for moral support along the way.

You Are Here is a study in mellow rock with an edge. This is a very difficult dynamic to pull off -- most bands fail horribly. The South seem to be the exception however, having crafted perhaps one of the finest pop/rock albums of 2008. Highlights include the symphonic mélange of Wasted, lead single Better Things, the headphone phonics of Tell Me and the highly danceable She's Half Crazy.

The South returns Brit Rock to the lofty place it held in the 1980's, with economical and memorable melodies, profound harmony and a mellow yet energetic vibe. You Are Here is one of the better albums I've heard in 2008, and should make end-of-year lists on both sides of the Atlantic. Put this on your to-do lists, folks.

You can learn more about The South at www.myspace.com/southofficial. You can purchase You Are Here at Amazon.com.