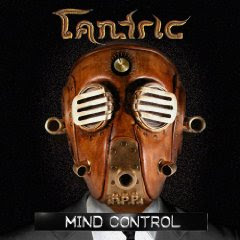 Tantric is a band whose existence is a parable of renewal. Born from remains of Days Of The New, Tantric has itself nearly fallen apart a couple of times only to come back in a new form; better and stronger than before. The driving force behind Tantric, vocalist/keyboardist Hugo Ferreira has never given up on his musical vision in the form of Tantric even though all other original members have moved on. These days Ferreira is joined by Erik Leonhardt (bass/vox), Marcus Ratzenback (violin), Joe Pessia (guitar) and Richie Monica (drums). The quintet's fourth album, Mind Control, will be released on August 4, 2009.

Tantric wastes no time, opening with the title track. Mind Control is deliciously hooky with a hard edge underneath. Minor-key triad harmonies and a bass line that just won't quit make this heavy rocker dangerously danceable without losing a bit of edge. Mind Control has very serious commercial potential as a Modern Rock radio track with potential to cross over into the Pop realm. Fall To The Ground steps back from the Pop precipice a bit for a slower and heavier guitar presence before breaking into a chorus that has chart gold written all over it. Coming Undone is a great heavy rock tune with some tremendous guitar work and strong harmonies, although it becomes a bit repetitive.

The Past Is Dead starts out as an acoustic tune, breaking into a big Pop/Rock anthem with a soaring chorus. This is the third song out of the first five on the CD with serious commercial punch, and Tantric doesn't stop there. Kick Back may be more confined to the Modern Rock outlets but still has the sort of explosive yet Pop-based sound likely to make it a hit. Intermezzo provides a brief divergence for some of the best hammer-on guitar work this side of Eddie Van Halen and serves as a breather before Tantric launches into the dark and searching Run Out. The guitar riffs here are hot and heavy even if the chorus has distinct Pop sensibility. What Are You Waiting For takes a more mellow approach with an acoustic-based sound and a more lyric vocal line. The song is something of a pep-talk about getting up and making the changes you want to see in your life. Let's Start opens up the throttle with heavy rhythms, big guitar sound and a melody line that leads into an explosive chorus like a slow-burning fuse. Tantric closes out with Guiding Me, a dark and moody rocker that makes maximum use of minor-key vocal harmonies and a lush, Pop-driven chorus. The tempo and sound here are perhaps a bit too dark for serious radio play, but the song definitely has elements that will get it noticed on the airwaves. The spiritual element to this song is also quite intriguing and will leave listeners with something to chew on as the music fades away.

Tantric has quite possibly exceeded their prior releases with an album full of dark, heavy and wonderfully accessible Rock songs with distinctive pop elements. Mind Control could be a monster, boasting no less than five songs able to make some serious noise on commercial radio. The move to both a heavier sound and a more hook-laden one is unusual (it's generally one or the other), but should serve Tantric well. Mind Control deserves to be a critical darling and a commercial one as well. Bravo.

You can learn more about Tantric at www.myspace.com/tantric. Mind Control hits shelves, real and virtual, on August 4, 2009. You can pre-order a copy through Amazon.com. Expect wide availability on digital sites. If brick and mortar is more your style, Mind Control should be available in music stores everywhere on July 21st.
Posted by Wildy at 5:20 AM

I've long been a fan of Tantric and never quite understood why they haven't been able to repeat teh success of their platinum debut. I love Hugo's vocals and the distinctive Tantric sound which balances heavy guitar and riffs withe interesting sound textures and melodies. I'm really impressed with the single "Mind Control' and look forward to hearing the entire album. I wish them the success they deserve with this album. Oh, and I love the artwork...

Congratulations again Tantric.
Tantric never ceases to amaze me! I love it's songs full of energy and inspiring lyrics
It's rare that it can be said very often lately...good luck, you deserve it!
Lola

I agree that the New Tantric has put out some new great music but to say this album has 5 songs that have the potential to make it to commercial radio is ridiculous.