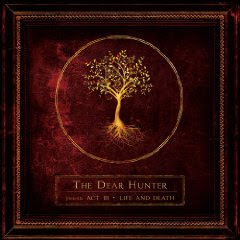 Providence, Rhode Island's The Dear Hunter is back with their third album, Act III: Life And Death, in a continuing song cycle about a character called, simply, "the boy". "The boy" is now a man weaving his way through the realities of day-to-day life. Love and loss, growth and decay vie for his energies on the way to renewal before he cycle starts all over again. Act III was produced by front man Casey Crescenzo, with guitarist Andy Wildrick sharing engineering duties. The Dear Hunter has taken great care to flesh out each song on Act III: Life And Death so that it reaches its full potential. The winner is you, the listener.

Act III opens with Writing On A Wall, burnished in vocal harmonies that would bring a tear to Brian Wilson's eye. This sunny prologue with an almost funeral-march like undertone serves as an intro to In Cauda Venenum, an urgent rocker that's part Queen and part Latin Rock Opera. Vocalist Casey Crescenzo has a wonderful "big rock vocalist" sound, mixing power, emotion and just a bit of melodramatic grit for a sound that's as glam as the band's. The Tank is bombastic and filled with wonderfully dark harmonies in both vocals and instrumentation. Something here is eerily reminiscent of Pink Floyd's best work, but I can't quite put my finger on it. The Poison Woman has one of those melodies you won't be able to push out of your brain; a Queen-like aura surrounds the song from vocal line which sounds enough like Freddie Mercury to make you look twice and the harmonic construction.

Mustard Gas retains the highly theatrical element that makes Act III - Life And Death work so well. Freddie Mercury is the last singer I can recall who could literally let you hear his heart break in his voice, but Crescenzo has that same gift. The arrangement here is brutal, jaunty and beautiful in turns, covering all of the markers from madness to transcendence. Saved brings a strong lyric melody in full and lush mostly-acoustic arrangement that sounds like it could a transitional piece in a stage show. He Said He Had A Story is a wonderfully structured bit of personal chaos, detailing the loneliness and fear that sometimes drives human interaction. This is a precursor to This Beautiful Life, an ironic look at struggle to survive and get ahead in day-to-day life. Queen fans will love this; The Dear Hunter are extremely adept at resolutions that aren't. Just when you think the harmonies and instrumentation are building to a conclusion or release, The Dear Hunter leads you down a side passage you didn't see. When the resolution does finally comes its almost a surprise.

Go Get Your Gun is incredibly catchy, you'll find yourself tapping or even dancing along while the dark subtext of the song sinks in a true flash of cognitive dissonance. Go Get Your Gun is a true bit of ingenious songwriting. Son brings home the truth that death is part of the dance of life, all relayed in the form of a somber waltz. Contrast this with Father, an ethereally layered and lush composition built on layered chords and harmonies. Act III closes out with Life And Death, a song that could be the closing number to a musical. It starts out with Casey Crescenzo and piano before adding in the rest of the band in a rising flourish. The drama and release of the entire album are here in an understated yet powerful fashion.

The Dear Hunter sound like they grew up surrounded by the sounds of Queen, Pink Floyd and other concept-album artists of the late 1970's and 1980's. I have not heard their two prior releases, but Act III - Life And Death is a concept album that's too well-written to simply be a conception. Characters and their tales come to life on Act III, driving events in directions that their creator(s) may have not initially conceived, but in ways that are essential to their stories. The composition and arrangement throughout the album are consistently excellent. The only complaint I could find about Act III: Life And Death was around the 58 minute mark when the CD stopped spinning. Like a great movie, I just didn't want it to end. Act III: Life And Death is an absolute must-listen; a Wildy's World Certified Desert Island Disc. Don't miss it!

You can learn more about The Dear Hunter at www.myspace.com/thedearhunter or http://www.thedearhunter.com/. You can purchase a copy of Act III: Life And Death at Amazon.com or download it from iTunes.
Posted by Wildy at 6:28 AM