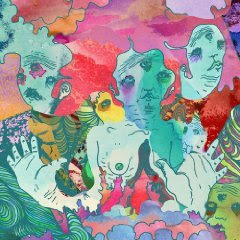 Originally from Wasilla, Alaska, Portugal. The Man is based out of Portland, Oregon these days. Originally formed as a creative outlet, Portugal. The Man has turned into a prodigiously creative band, turning out four albums in the past four years. Their fourth album, The Satanic Satanist, hits stores on July 21, 2009, featuring eleven tracks full of Rock N Soul influences and an unmistakable taste for dramatic musical moments.

The Satanic Satanist opens with People Say, a wonderful mix of Americana and Soul. The song has a distinctive Beatles feel, particularly in the chorus, and is an incredible listen. Lovers In Love plays a bit with loops and effects, but maintains a strong melodic sense in a killer arrangement that you'll be hard-pressed not to get up and dance to. The Home has a dark and funky feel that you won't be able to get out of your head (and is my personal favorite song on the CD). Do You is a close second, with Portugal. The Man digging down and finding a bit of British bombast at their disposal (particularly in the chorus). Everyone Is Golden returns to a Beatles theme for the opening notes. The arrangement is strong, but the repetition of the one-line chorus gets to be a bit much after a while. Be sure also to check out Let You Down and Mornings.

Portugal. The Man follows a fairly aggressive writing/recording schedule given that they perform around 250 live dates per year. The material presented on their latest CD, The Satanic Satanist is a highly irregular and uneven effort. When Portgual. The Man is on their game they are eminently listenable. When they're not the results can be downright messy. There's enough good material on The Satanic Satanist to get it on your radar. Check it out!

You can learn more about Portugal. The Man at http://www.portugaltheman.net/ or www.myspace.com/portugaltheman. The Satanic Satanist will be released on July 21, 2009. You can purchase a copy at Amazon.com or download the album from iTunes.
Posted by Wildy at 4:55 AM

Labels: Portugal The Man, The Beatles

If any of you like psychedelic rock n roll with good song writing check out our album I Want To Talk To God. You can download it for free at http://www.mediafire.com/download.php?zadnl2tyod1 this is not your typical modern rock music. This will make you feel. Give it a quick listen at www.myspace.com/stealtheprize
Love you all.
Ben