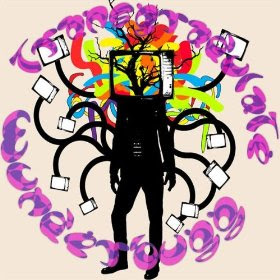 Seattle electro-pop/rock trio Wunderbugg, led by the lyric vocals of Ani Johnson and key work of Whidden Flores on Transgradulate, their follow-up to last year's debut CD Written In Flesh. Drawing on a 1980's dance vibe, Wunderbugg updates the sound with a psychedelic/progressive/electro feel to create highly danceable songs with melodies that mean business. Wunderbugg spent much of 2008 on the CMJ charts with Written In Flesh, and Transgradulate appears to have them headed in the same direction for 2009. The only difference is that in 2009 the college charts may just be the start.

Transgradulate opens with Skin, a nuanced and reserved bit of Pop-Electronica that dwells in slightly ambient territory for large portions of the song. Johnson's vocals are as lush as the arrangement, with Flores providing a full and active tapestry on keyboard, and Loren Atzin framing that tapestry with tidbits of programming magic. Ether is a bit more aggressive, having the feel of a late-80's attitude-laced dance song. Johnson is pitch perfect here, but her vocals are bit too restrained as she tries to stay within the boundaries drawn around her by the instrumentation. Pandora's Box Remix also has that laid back, almost repressed feel to it. There is energy here, but it's almost as if Wunderbugg has smoothed the sound to a point where no rough edges are left; there's no raw emotive quality to the song and so it comes across almost as a dissociated piece of music.

Coachella Veteran has an almost disco-sound to it. The song shows a bit more energy than we've encountered thus far, but Johnson retains a vocal style that is aesthetic yet somewhat flat. That's not to say she's off pitch; Johnson's vocals throughout are technically perfect but are so crafted into the overall sound that they lose their sense of vitality. Wunderbugg shows some of the life that ran through their debut album on Dreamcatcher, a sonically interesting electronic field trip that is certain to get your neurons humming. Pandora's Box By The Sterile Symphony is very low key and lyric and outshines the remix by several paces. Be sure also to check out High Dawn for a bit of Space Age electro and the title track.

Having reviewed both Written In Flesh and Transgradulate, my impression is that Written In Flesh is an album that just happened. The writing/creation process for that album was fed by the excitement of doing something new and the songs flowed as freely as the sound. Transgradulate, on the other hand, was a highly planned and structured creation. Where Written In Flesh was an attempt to make an album, Transgradulate isan attempt to make a certain type of album; and the result is that it might have been over planned. The energy and vitality of Wunderbugg's debut just isn't quite here, although it does show up in a few songs. The compression of style and sound does a lot to mute the individual talents that make up Wunderbugg on Transgradulate; nowhere is this more evident than in the vocals of Ani Johnson. Wunderbugg has an amazing vocalist in Johnson, an amazing keyboard player in Whidden Flores, and a highly talented programmer/musician in Loren Atzin, but the current sound is one of Flores and Johnson being constrained by the programming rather than being supported by him. It's something of a reversal from Written In Flesh, and perhaps doesn't serve the band as well as it might. It's very evident that there's some solid writing here, and a high degree of talent, but the mix and roles on Transgradulate just doesn't put that talent to its best use. While it’s still quite good for the genre and likely to build on the success Wunderbugg achieved with Written In Flesh, it just isn’t what Wunderbugg is capable of.
Rating: 2.5 Stars (Out of 5)

You can learn more about Wunderbugg at www.myspace.com/wunderbuggispimp or http://www.wunderbugg.com/. Transgradulate is due for an August, 2009 release on CD, but you can download it now through Amazon MP3.
Posted by Wildy at 5:10 AM