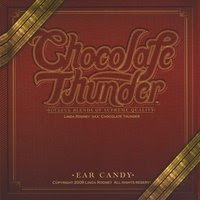 Linda Rodney has done the acting thing. She's done the modeling thing; but music has always been her first love. Singing in church as a youngster, Rodney quickly stood out from the other kids with a big, powerful voice that you simply could not ignore. She was also exposed to many of the greats of R&B and Blues as a child, from Muddy Waters to Shirley Cesar to the Queen Of Soul, Aretha Franklin herself. After training with internationally known opera singer Sarah Reece, Linda began performing and touring, sharing stages over time with the likes of Elmore James, Jr., Main Street Blues Band, Little Pink Anderson and B.B. King. Performing under the name of Chocolate Thunder, Rodney's popularity began to grow. Due to popular demand from fans, Chocolate Thunder released her debut album in 2007. In 2009, she returns with Ear Candy, a collection that ranges from Blues to Soul to classic R&B.

Ear Candy opens with Love Thang, a classic 1970's Soul/Funk song. It's not the best on the album but a fair stylistic opening. Love Thang gives a clear picture of Chocolate Thunder's voice: It's big; it's powerful and it can move a crowd. There is an occasionally tendency toward to flat out in runs and transitions, most notable on the opening track, but Rodney's personality is so very much a part of the song that you might not even notice. Power Of A Lady gets into a 1970's Motown feel that's comfortable but doesn't really reach Chocolate Thunder's potential. Rodney hits full speed on Other Side Of Memphis, a classic Motown-style tune that would have been the rage of radio forty years ago. The brass section here is a great touch, but Rodney sells this song like she's lived it. It's All Good blends elements of Gospel and Jazz with a Caribbean touch and is my personal favorite on the disc.

Rodney wrote My Georgia Pine for her husband, and her conviction on the song is compelling, even if the lyrics come across as a bit "hokey love song" at times. Bring It On is presented in a fairly standard modern R&B arrangement but has the feel of a classic that's been updated. I like the song as presented but hear great potential in the song perhaps in other stylistic arrangements. Just Gotta Tell Ya hints at 1950's and early 60's girl groups; this is a great song that's right up there with It's All Good. Chocolate Thunder closes out with 555-Help, a classic mix of Rock, Gospel and R&B.

Chocolate Thunder is a compelling performer for a reputation for grabbing listeners by the ears and not letting go until the performance is over. Her voice isn't quite up there with idols like Aretha Franklin or Etta James, but it's quite good. Combine that voice with a dynamic personality and a compelling ability to sell a song and I'd have to say Chocolate Thunder has the potential to go a long way in this business. Ear Candy is a strong album with a couple of stand out tracks and a couple of duds, but is generally a strong mix of Rock, R&B, Soul and Gospel. Ear Candy has broad appeal.

You can learn more about Chocolate Thunder at http://www.cthunder.com/ or www.myspace.com/chocolatethunder1. You can purchase Ear Candy as either a CD or download from www.cdbaby.com/cd/cthunder2.
Posted by Wildy at 4:55 AM