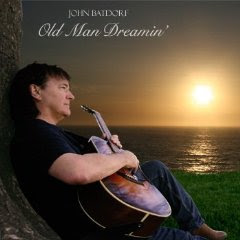 John Batdorf has been pleasing audiences since his early days with Batdorf & Rodney in the 1970's. Over the years Batdorf has refused to stand still musically. He's been a top-flight session singer in L.A., a composer for TV shows such as Touched By An Angel and Promised Land, and continued to write and record songs both as a solo performer and with folks such as Mark Rodney and Michael McLean. Batdorf has always had a touch for acoustic pop/rock songwriting but in recent years seems to have developed a deeper love of melody and harmonies and a penchant for story-driven songwriting. These qualities are omnipresent on Batdorf's latest CD, Old Man Dreamin'.

John Batdorf sounds like a cross between The Eagles and Shaw/Blades on much of Old Man Dreamin'. His voice is golden, and the vocal harmonies border on angelic at times. The CD opens with What D'Ya Got, a musical treatise on what love really means to each of us, particularly in tough times. If Batdorf had written this song thirty years ago he'd own half of California by now. Love: All I really Know About It sticks with a similar theme. The harmonies are amazing and the song is intelligently written without getting mushy or cliché. That Don't Seem Right To Me is an anthem for the days we are living in. Batdorf starts with the fact that the current fiscal crisis finds the banks and bankers who caused it getting rescued by the folks it most affects (all of us), while we struggle to make ends meet with disappearing jobs, falling wages and high prices; he goes on to detail a number of things about modern life that just don't fit together. The song is wonderfully written in a strong and steady pop style that could gain it some real attention.

Will I Love You Forever is an honest song about love and what it should be. Old Man Dreamin' is bluesy classic rock gone acoustic. The arrangement on this one is amazing, and the sound highly reminiscent of Shaw/Blades. I Thought I'd Try A Love Song is a cute tune that takes a darkly ironic turn in the closing moments. Ain't No Way turns out to be my personal favorite, with a vibrant bass line to the instrumental magic created by the violin and acoustic guitar. The vocals and harmonies here are gorgeous. Don't Tell Me Goodbye has a classic country heartbreaker sense to it as a plea from a man on the verge of losing all he wants. Sixteen changes pace and gears significantly in a disturbing but well-told bit social commentary. I don't know the specific premise behind the song but a few would apply quite well. I Will Rise closes out Old Man Dreamin' in a musical version of Jack Nicholson's line from As Good As It Gets, "You make me wanna be a better man". This is pure mix-tape material for the more mature crowd; a wonderfully well-written tune.

John Batdorf has always had a distinctive talent for songwriting and a golden voice to deliver those songs, but over time he's really grown into his songwriting in a fashion that borders on transcendental. Old Man Dreamin' is an incredibly vibrant set of songs based in honest thought, word- and song craft and some of the prettiest melodies you're likely to find in Folk or Pop music. Make sure you take some time to spend with John Batdorf's Old Man Dreamin'; it's quite an album.