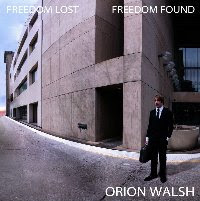 Lincoln, Nebraska based songwriter Orion Walsh comes back in August of 2009 with his sophomore solo release, an EP entitled Freedom Lost, Freedom Found. Readers may remember Walsh’s Tornado Lullabies, a highly personal and distinctive musical memoir we reviewed last year. Walsh continues in the same vein, albeit with a bit more of the polish of time on Freedom Lost, Freedom Found.

Freedom Lost, Freedom Found opens with Freedom Lost And Freedom Found, a high energy Americana/Folk/Rocker destined for the replay button many times over. Walsh's voice wends its way along the melody line in flawless fashion, although there's one note that's repeated a number of times that likely pushes the bounds of his range. Starkweather gives musical life to spree killer Charles Starkweather in engaging fashion. The form here is classic folk music and sounds like it could have easily come out of the 1960's. Football Town is all about growing up in a small town but having big dreams that can (perhaps) only be fulfilled elsewhere. The high energy of the arrangement juxtaposes against the melancholy feel of the lyrics. Run For The Hills finds Walsh slowing things down a bit with a polished rocker reminiscent of classic Neil Young. The theme here is global warming, and is based loosely on the sort of dire predictions that have become a calling card of that conversation. Walsh closes out with Journey To The Sea; a gorgeous song about two people in a relationship who want two different things: she wants more of him and he wants to figure out who he is. The arrangement here is a gem, and Walsh's vocals make the song.

Orion Walsh continues to write and record great music a little bit at a time. I have no doubt that over time he'll develop an impressive body of intelligent, well-written songs. Walsh is the sort of performer that other performers and songwriters respect, and Freedom Lost, Freedom Found will only enhance the reputation he's already earned.

You can learn more about Orion Walsh at www.myspace.com/orionwalsh or http://www.orionwalsh.com/. Freedom Lost, Freedom Found is due for an August, 2009 release.