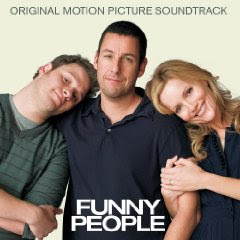 On July 28, 2009, Concord Records releases the soundtrack to the newest Judd Apatow flick, Funny People. The film, starring Adam Sandler, Seth Rogan And Leslie Mann, is Apatow’s third (The 40-Year-Old Virgin and Knocked Up), and is all about his days rooming with Adam Sandler when they were struggling comedians. The soundtrack features a selection of deep cuts and first takes from big name artists primarily from the 1970’s, with exclusive live cuts from James Taylor and Wilco.

Funny People opens with Paul McCartney on Great Day, a bluesy acoustic piece built from guitar, hand rhythms and voice. McCartney digs into the gorgeous melody line with everything he has for a highly enjoyable experience. Robert Plant's turn on All The King's Horses is thrilling; you almost wouldn't know this was the former Led Zeppelin front man. Two songs from Warren Zevon make the cut; Keep Me In Your Heart and Numb As A Statue, showing some of the range of his songwriting talent. Neil Diamond's We is presented here in an early form and may just be better than the recorded work most are familiar with. The star of the disc is John Lennon on an acoustic version of Watching The Wheels. The coffee-house feel to this cut just adds to the charm of a vastly under-appreciated song. James Taylor runs a close second with a live version of Carolina In My Mind.

Adam Sandler gets in two performances of his own, but these probably would have been left to the movie and omitted from the soundtrack. His cover of John Lennon's Real Love finds Sandler overmatched vocally and in the production booth. Already week vocals are overpowered at the end of the verse. George Simmons Soon Will Be Gone is a performance piece from the movie that disappoints on several levels. This is closer to the Sandler you might have heard during his SNL days, but humor is pushed aside in favor of jocularity and shock value. For a movie entitled Funny Men, it seemed to miss the point.

As soundtracks go this one is fairly typical. There are some brilliant performances (McCartney, Lennon, Neil Diamond), some so-so ones (Wilco and Andrew Bird, Ringo Starr) and some truly puzzling ones (Adam Sandler, Coconut Records). The inclusion of McCartney and Lennon will ensure some decent sales of this disc (or at least downloads of those songs), but one is left with the impression that some of the song selections were settled by a randy game of Rock, Scissors, Paper, Lizard, Spock.

You can learn more about Funny People at http://www.funnypeoplemovie.com/. You can purchase the Funny People soundtrack at Amazon.com or as a download through Amazon MP3.
Posted by Wildy at 6:14 AM