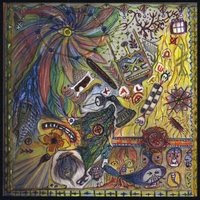 Kowtow Popof is a Washington, DC area singer-songwriter who'd developed a distinctive taste for instrumentals that mix organic and electronic instrumentation. This form of Organica has developed a bit over time, finding fruition in Kowtow Popof's latest CD, Exalted Headband. Inspired by cinematic composers such as Bernard Herrmann and John Barry as well as electronic pioneers Ryuichi Sakamoto and Bill Nelson, Kowtow Popof wrote Exalted Headband with a cinematic scope in mind, using recurring thematic elements to construct an integrated series of compositions that work as a stand alone modern Organica symphony.

Exalted Headband is extremely intricate and nuanced in both composition and performance, opening with the Acoustic/Electric hybrid of Swimming Downhill, which sounds a bid like Windham Hill updated for the digital age. Enigma Of The Spokes continues in this vein, but has a more European sound, mixing acoustic guitar with electronically-generated strings for lovely soaring passages you'll want to play again and again before branching into piano/synth duets that are as pretty but perhaps not quite as imaginative. Kairos '77 is an intriguing composition, struggling with its own identity crisis between a theme of hope or despair. This is a piece I'd love to hear broken down for live instruments, and I think there is a lot of beauty in the depths that electronic instrumentation can seek but not quite find. Kung Fu Sunset sounds like what might have happened if Vince Guaraldi had fallen in love with space-age Electronica rather than Jazz.

Run To Daylight features one of three primary themes from Exalted Headband quite prominently. The Daylight Theme is nearly a stand-alone melody here, sounding like something out of 1970's Jazz-Pop set to a dance beat. Exalted Headband (Funkspiel Fringe) sounds like a theme to a 1970's detective show, right down to the Chicago-style horns. Theme From Lucky Guy sounds like the theme to a show you might find on ESPN in part A with a creepy transition or bridge. My favorite track on the CD is Balloon Bazooka; a surreal waltz that devolves into a computer-generated electronic composition that will invade your brain and stay there with a thematic element that intrigues. Rebreather is a fun listen, using a synth voice-generated melody as a foil to its thematic expression. Other highlights include Chronis, Children Of The Teeth and Floaters.

Kowtow Popof is an unusually placid voice in electronic music, searching for thematic order where chaos reigns supreme. His use of musical elements from across various cultures and schools of musical thought suggests significant classical/theory training, and opens doors for Popof that many musicians might not even know are there. Exalted Headband works on so many levels because of Kowtow Popof's willingness to try anything. Exalted Headband is hopefully a herald of things to come.

You can learn more about Kowtow Popof at http://www.wampus.com/ or www.myspace.com/kowtowpopof. You can purchase a copy of Exalted Headband as either a CD or download at www.cdbaby.com/cd/kowtow6.