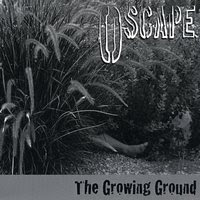 Tucson, Arizona’s Oscape has been part of the local music scene since 1991, playing all styles of music both solo and in ensembles. With influences ranging from Queensryche to Pink Floyd with a hint of Alice In Chains thrown in, your best guess about what comes next from this artist is as good as anyone’s. Oscape released The Growing Ground earlier in 2009 and has received a wide variety of feedback thus far. Let’s check it out.

The Growing Ground opens with The March, a sort of musical prologue that would seem to set a mood for the album, but seems somewhat incoherent in light of what comes afterward. Doing Business is a slow and heavy guitar rocker that doesn't leave a great impression. The lyrical content seems a bit limited; the melodic makeup of the song is relatively flat and the vocals are pitchy. The Inside Joke is a big plodding rocker that's more about sound than melodic progression although the guitar work is worth checking out. The Bully Theory is a politically motivated song taking issue with the Bush Administration and the wars they prosecuted. The lyrics here are artfully constructed and convey the intended message, but the arrangement is more of a wraparound series of chords that frame the vocal line without speaking much of themselves. Or Else is lyrically brief with three voiceovers expressing the usual Pentecostal view of humanity in the eyes of God, and then turns this view on its ear by suggesting that the true darkness is the form of self-righteous zealotry responsible for that view. The Growing Ground closes out with the title track. Growing Ground is the best song on the disc from a heavy rock perspective. Dueling vocalists (so called because they never really sing together in spite of singing essentially the same line throughout) are a distraction. The arrangement is a bit more imaginative than much of the EP; a step in the right direction, but is still quite limited in its scope and vision.

Oscape sticks to their dark and compact vision of hard/heavy rock throughout The Growing Ground. Musically they make no mistakes, but take no chances either. The Growing Ground doesn't make a significant impression for its lyrical content, and overall makes a decent showing without ever really having a standout moment. On the whole, it's just a little too homogeneous to garner a significant following, although there are certainly folks out there who appreciate this style of compact, narrowly constructed Hard Rock. Oscape will find fans there.

You can learn more about Oscape at www.myspace.com/oscape. You can purchase a copy of The Growing Ground at www.cdbaby.com/oscape.
Posted by Wildy at 5:50 AM