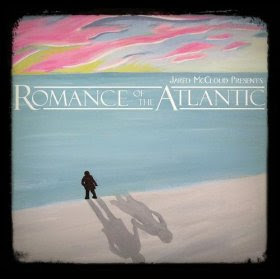 Jared McCloud spent several years playing in bands on the hard rock/metal scene in southern New England before making a go of it on his own. The Winchester, Connecticut singer/songwriter has made rapid progress in building a fan base, graduating to larger and larger stages in quite quickly. 2009 sees the release of McCloud’s solo debut CD, Romance Of The Atlantic. McCloud displays unusual talent in the crafting songs, and most readers are likely to be at least a little intrigued upon hearing him sing.

Romance Of The Atlantic is a confounding record. I really like Jared McCloud's songwriting style. He shows a lyrical and musical ethic not dissimilar to that of a young Springsteen, yet wallows in love songs ad nauseum (particularly on the second half of the disc). I like the bare-bones aesthetic of the album, yet hear numerous places where the creative tension of writing with others would flesh out his songs in wonderful ways. Finally, as much as I try to like it, I have a hard time with the nasal quality of McCloud's voice. Consequently I find myself very conflicted about Romance Of The Atlantic.

McCloud is a strong lyricist and a tremendous guitar player (check out the guitar work in songs like Colors and Under Midnight Star to see what I mean). He has a talent for capturing moods (NYC Song) and people (St. Catherine's Anthem) in song while holding nothing back. He even writes compelling and interesting ballads (Only A Reminder, Starlight & Fireflies), but gets bogged down in the overly emotional mess he weaves at times (Here, At The Edge Of The World). Starlight & Fireflies is my favorite song here, although its one of the tracks that needs some tension in the creative process to really reach its potential. St. Catherine's Anthem shows McCloud at the height of his lyrical and story-teller prowess, while NYC Song creates a moment so real you can feel it.

Jared McCloud is a mass of contradictions on Romance Of The Atlantic. He sounds to me like a nasal version of Liam Gallagher, and I had a hard time getting by the voice (which in itself wasn't bad, I just couldn't get past that nasal quality). The songs are a mix that runs from great to average but grating. I think it’s safe to say that while McCloud has essentially found a sound he may still be refining the process a bit. When everything clicks, Romance Of The Atlantic has moments of brilliance. Most of the disc consists of smaller peaks and troughs amid the highs and lows. I think listeners will find a lot to like on Romance Of The Atlantic, and whatever comes next is likely to be even better.

You can learn more about Jared McCloud at http://www.jaredmccloud.com/ or www.myspace.com/jaredmccloud. You can purchase a copy of Romance Of The Atlantic from Sling Slang Records, or digital copies from Amazon MP3 or iTunes.
Posted by Wildy at 5:05 AM