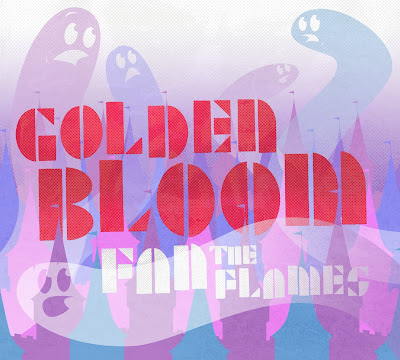 Shawn Fogel is, for all intents and purposes, Golden Bloom. The next time you catch Golden Bloom live there will be a traditional band on stage, but on Fan The Flames (August 18, 2009), Golden Bloom's latest CD, Fogel played all instruments and sang all vocals. Fan The Flames finds Fogel turning his songwriter's eye outward, breaking from his past full of relationship songs to tunes about the world around him. Produced by Peter Katis (The National, Interpol), Fan The Flames sets up Golden Bloom for a very good 2009.

Fan The Flames opens with E.H.M., a bit of guitar power-pop at its finest. This is a great tune for commercial radio, playable at Country, Americana and Pop/Rock outlets. Fan The Flames seems to deal with human nature, greed and a desire to set things to rights. Doomsday Devises is a whimsical and vaguely disturbing tune about using ultimate measures to gain your means. She Leaves Me Poetry is a gorgeous song about a relationship you can't live without but which you can not survive. Fogel shows a distinctive talent for lyrics here; prodigious enough to match his penchant for unmistakable and infectious melodies.

Dead Petals takes on a Beatles/McCartney-esque feel, with a melody the lads from Liverpool would be happy to have written. If You Believe is a delicious bit of Americana/Pop that will get stuck in your brain and stay there. My favorite song on the disc (at the moment) is Theme For An Adventure At Sea. There's something about the melody and the driving nature of the song that makes it difficult to get out of your head. Be sure also to check out The Mountainside Says and the last track, called Untitled.

Golden Bloom isn't the sort of project that is likely to get a lot of popular radio play, but that may simply be a sign of the high quality of the music on Fan The Flames. Like Wilco before them, Golden Bloom creates a sound that is accessible and poppy without selling out their vision of what the music should be. Fan The Flames is a significant release, worthy of your attention and time.

You can learn more about Golden Bloom at www.myspace.com/thegoldenbloom or http://www.goldenbloom.net/. Fan The Flames hits the street on August 18, 2009. Keep checking Golden Bloom’s website for more information.
Posted by Wildy at 5:10 AM