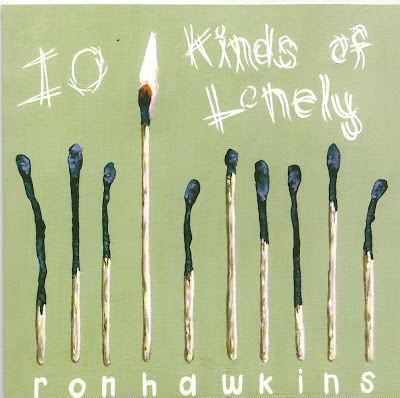 Ron Hawkins has been a part of the Toronto music scene for nearly eighteen years now, both with The Lowest Of The Low and as a solo artist. The Lowest Of The Low remains one of the most influential Canadian bands of the 1990's, with their debut album Shakespeare, My Butt named as one of the ten greatest Canadian albums of all time. As a solo artist, Hawkins has maintained a somewhat lower profile, with a small but highly devoted following primarily in Southern Ontario and Western New York. This is surprising as Hawkins may just be one of the finest lyricists of his generation, drawing comparisons to Bob Dylan, Tom Waits and poet Charles Bukowski. After many years performing his alt-Rock compositions, Hawkins decided it was time to take his brand of world-weary and intelligent song-writing and dress it up in a Country/Americana shell. The result is 10 Kinds Of Lonely, due for release in August of 2009.

10 Kinds Of Lonely opens with The Devil Went Down, a tales of post-modern decay told in a minimalist Americana arrangement. Hawkins alternates the decay of a small town with the ebbing fortunes of one of its residents as they dance down parallel spiral staircases. Deadman finds Hawkins canting about unrequited love. His Blues-inspired musical spirit drives the song. The song features the sort of lyrical magic that is Hawkins' signature: "A dead man talkin' about love is like a soldier talkin' about peace / You keep talkin' about love but that name ain't familiar to me). Sticking with the general theme, Don't Be Long is a musical ultimatum that lacks the courage of its convictions; a snapshot of a dysfunctional relationship where love overpowers common sense on conditional terms.

Ron Hawkins has always had an ability to paint people in his songs in ways that seem more alive than any photograph might. Genevieve is one such song; once again playing on the theme of unrequited love, Hawkins speaks with respect to someone who might not ever love herself enough to be loved. Hawkins dwells in the underside of human emotion but always with a deft touch ("All those neighborhood boys just wanna get in your corduroys / Can't blame 'em but they miss the point with a girl like you"). Telltale Heart is a real treat, with Hawkins reaching for a bit of the High Lonesome sound of Bill Monroe. The song never quite becomes a bluegrass tune, but you can hear the theoretical arrangement practically coalesce around a song that actualizes as a maudlin waltz. The vocal harmonies provide sonic layers to an otherwise sparse arrangement. Lyrically Telltale Heart is one of the more purely poetic songs on the disc and is a personal favorite. The Prodigal Sun plays on the biblical concept but also suggests a feeling of turning a page on the past, as if the young man has sowed his oats and is finally coming home to take up the mantle of his life.

D.F.W. finds Ron Hawkins in classic troubadour form. Here he paints a picture of a relationship and a person that breathes before your ears as it falls apart in cinematic scope. The arrangement is reserved and quiet; nearly reverent. The song also features one Hawkins' finest lyrical turns yet: "Woke Up Sunday Morning with a freight train on my chest / evangelically alone; just me and that old infinite jest / Words can feel like stones, words can be a noose / God speed, D.F.W.”. The song is a heartbreaking thing of beauty; a masterpiece, and may perhaps be his finest composition overall. The Rain's The Thing features a melancholy spirit mixed with hope and a dash of wisdom in a moment that is typically Ron Hawkins even in a vaguely Country setting. 10 Kinds Of Lonely closes out the set; something of a children's counting book set to music with a more mature theme. The song seems to confirm the sense that 10 Kinds Of Lonely is something of a musical/personal corner for Hawkins.

Ron Hawkins is a rare talent who is under-appreciated in his own time and place. The fact that he never really caught on in the US is a shame, because there is a distinct hunger for his brand of honesty (musical and literal). I will make the proper disclaimer and tell you I am personally a fan of his (have been since about 1993 or so), but I was blown away by 10 Kinds Of Lonely. His last couple of projects (solo and with The Lowest Of The Low) have been outstanding but not necessarily a big stretch. 10 Kinds Of Lonely is a stretch; a risky one and Hawkins nailed it. 10 Kinds Of Lonely can be nothing short of a Wildy's World Certified Desert Island Disc; it's a treasure.

You can learn more about Ron Hawkins at http://www.ronhawkins.com/. 10 Kinds Of Lonely will be officially released on or about August 6, 2009. You’ll be able to pick up a copy at http://www.victimlesscapitalism.com/.
Posted by Wildy at 6:09 AM