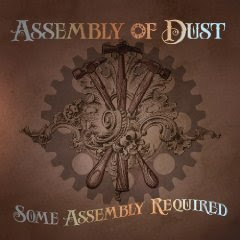 Assembly Of Dust has gained a moderate amount of commercial success over nearly a decade together, but has quietly become one of the most respected bands in music circles. Primary songwriter, singer and guitarist Reid Genauer has a lyrical bearing that falls somewhere between Bob Dylan and Martin Sexton; the gritty everyman with a lyric voice reminiscent of a cross between Neil Young and Glenn Frey. Adam Terrell (guitar, vox), Andy Herrick (drums) and John Leccese (bass, vox) support the writing process by not only providing stellar backdrops for Genauer's songs but also help to shape and caress the songs into life. On July 21, 2009, Assembly Of Dust returns with what might be their most focused and compelling album to date in Some Assembly Required. This time around Assembly Of Dust brings some close friends and even some of their idols along for the ride, as no less than thirteen guest musicians can be found on the CD. Richie Havens, Keller Williams, David Grisman, Bela Fleck, Grace Potter, Martin Sexton and Mike Gordon are among the luminaries pitching in, but don't think this is a gimmick to draw in listeners. If anything, it's a testament to the type of music Assembly Of Dust has made all along that so many fine musicians want to participate in Some Assembly Required.

Some Assembly Required opens with All That I Am Now, a vocal duet between Reid Genauer and Richie Havens. All That I Am Now is a song of resignation; an acknowledgement of the burdens of time and experience and what they can do to us. The song is resigned but also self-confident, and the arrangement runs a wonderful line between Rock and Country that we'll call Americana for lack of a better term. Buffalo Killers Zach & Seth Gabbard help out on vocals for Pedal Down, a deliciously Eagles-esque California Country rocker. David Grisman sits in on mandolin for Cold Coffee, a classic sounding tune with harmonies reminiscent of CSNY. This is a great bit of songwriting; highly intelligent yet charmingly colloquial. Phish's Mike Gordon sits in on bass and background vocals for Arc Of The Sun. The melody here is highly memorable and lyric, providing one of the most enjoyable listens on the disc. Second Song is built around a vibrant riff from guest Keller Williams. If any song from the disc ends up in a movie or television show it will be this one. The pacing and melody are perfect for the big or small screen and the arrangement is highly accessible across genres.

Light Blue Lover is an interesting song about letting go, including an unfortunately brief cameo by the exquisite Grace Potter. My favorite song on Some Assembly Required is Edges, featuring Bela Fleck on banjo. There's a sort of synergy that happens between Assembly of Dust and Fleck that's magical enough to shine through the highly produced format that is a CD. Be sure to check out Revelry, with Martin Sexton on "electric vocals". Revelry walks the fine line between folk and blues, resulting in an intriguing acoustic arrangement. Assembly Of Dust pulls back for Straight, the only song on the album that doesn't feature a guest. There's a bit of classic country in this melancholic ballad with a melody that washes over you like a gently rising tide. moe's Al Schier brings a little bit of crunch to High Brow on guitar before Assembly Of Dust closes out with You Lay The Dust (Jeff Pevar guests). Also make sure to check out John Scofield's guitar work on Borrowed Feet.