Review: A Beautiful Curse - As It Should Be 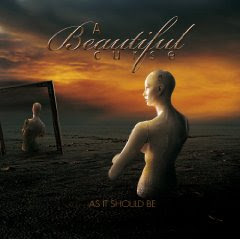 A Beautiful Curse - As It Should Be
2009, CTM Entertainment

A Beautiful Curse started out as a project intended to write music for movies & television, but has grown into something more organic over time. Musician and producer Kenny James (George Clinton and the P-Funk All Stars, 24-7 Spyz, The Samples) began this project in 2004 while producing works for various Indie films. After meeting guitar player Brian Skeel (Contingence), the two hit it off and started working together. By 2007 Skeel was a vested member of A Beautiful Curse, but something was still missing. In 2008, the band discovered vocalist/pianist Savannah Kocher. Within a month of finding her, Kocher was inducted as a member of A Beautiful Curse. The synergy the trio discovered had much more life and vitality to it than just a writing project. It soon became clear that A Beautiful Curse would have more facets than that. Cut to 2009, and the release of As It Should Be, a stunningly ambitious and divergent album that thrums with its own inner life.

As It Should Be opens with On The Other Side, a dark and vaguely Middle Eastern sounding tune that owes serious homage to early Sarah McLachlan recordings. Vocalist Savannah Kocher has the same ethereal air that infused McLachlan's early work. The sound here is a bit more of the electronic age, creating a stark tapestry against which Kocher's voice plays perfectly. At about the five minute mark the song kicks into overdrive, with a heavy guitar-driven segment reminiscent of Evanescence and A Beautiful Curse begins to displays some Prog tendencies you might not have previously guessed at. The mix of crushing Rock/Metal and Ethereal, near-Ambient Rock is quite unusual. The Soul Divine kicks off with some headphone worthy sounds reminiscent of the great albums of the 1970's and develops into another Ambient/Prog Rock/Trance hybrid. Fans of Pink Floyd will dig the vibe here. A Lot Like Diamonds is more in the dance club realm, carrying a sparse and halting melody line surrounded by much percussion and electronic sound. Kocher is entrancing on vocals, but the song just doesn't seem to have a lot to say, and while the rhythmic nature of the arrangement has a lulling effect, the song gets bogged down in its own complacency.

A Mind Of It's Own features a distinctive arrangement of rhythms and sounds supporting the free-form rap of Kenny James. This is one of the more interesting songs on the disc, featuring a roving bass line that sounds like it could have come from an early Police album. This Is My House takes us back to the 1980's in a Jan Hammer-inspired instrumental that will get your feet moving. Delicate brings slow jams into the 21st century with a sound Barry White would approve of. This was perhaps my least favorite song on the disc, but it accomplished what I presume the artists were trying to achieve. A Beautiful Curse closes out with Everything Is Changing, a bit of electronic dance craft that sticks to formula over creative force. Unlike much of the album, this feels like something of a cookie cutter track, created perhaps to fill out the album but not really offering much for listeners to dig into.

A Beautiful Curse suffers from trying to be too many things. Hard rock? Check. Lyric/Ambient Rock? Check. Electrohouse/Dance? Yep. Rap? Got that too. R&B? Yes. The difficulty becomes that by the end of As It Should Be the listener has no real idea who or what A Beautiful Curse wants to be. The band is at their best with Kocher on vocals and with the mix of Electronic and Rock genres. This is an album constructed for the age of downloads, with single songs that will play well to multiple genres, but it will be hard to build a long-term fan base from such divergence in sounds. When a band aims to be flavor of the month they may well get what they aim for, but nobody wants old flavors once they're used up, and A Beautiful Curse has too much talent to just be flavors of the month. Hopefully over time the band will pick a direction that at least becomes a primary sound and dabble elsewhere. As It Should Be is a strong collection of songs, but it's too scattershot to really be called an album.

You can learn more about A Beautiful Curse at http://www.abeautifulcurse.com/ or www.myspace.com/abeautifulcurse. You can purchase a copy of As It Should Be at Amazon.com.
Posted by Wildy at 6:30 AM