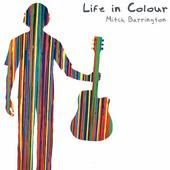 Mitch Barrington is an 18 year old singer/songwriter from Queensland, Australia who has been working much of his life to become a musician. Stepping into a studio for the first time at the age of 17 he cut tracks for what would ultimately become his debut EP, Life In Colour. In March of 2009, Barrington won the Battle Of The Bands on Sea FM, one of the highest rated radio stations in Australia, and continues to gain fans both through shows, sporadic airplay and word of mouth down under. If Life In Colour is any indication, Barrington is going to be making music for a long time, and on more continents than just his own.

Life In Colour opens with No Matter What, a mellow, mid-tempo Pop/Rock tune with more sway than Rock to it. There is a sneakily addictive air to this song, with it's melody that's bound to get caught up between your ears. The declaration of the song is bound to score some points with the romantically inclined; don't be surprised if Barrington finds this song licensed for prime-time television. Trying To Fly reminds me a bit of Jason Mraz, although Barrington has a deeper vocal sound. This is a very catchy tune in spite of the slower tempo; a potential hit. Paradise has a fuller sound, aided by percussion and bass in addition to Barrington's acoustic guitar. The resemblance to Jason Mraz is more notable, but this is a song that doesn't need artist comparisons to sell itself. Paradise is a great bit of Pop/Rock songwriting. Barrington closes out with Tomorrow in a ready-for-radio Pop/Alt-Rock arrangement.

Mitch Barrington is a plus singer with songs made up of strong lyrics and intricate instrumentation (even when it's just acoustic guitar). Life In Colour is an exciting introduction to Mitch Barrington; one that leaves us looking forward to what comes next.

You can learn more about Mitch Barrington at www.myspace.com/mitchbarrington, where you can purchase a copy of Life In Colour directly from the artist.
Posted by Wildy at 5:10 AM