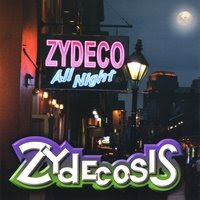 Zydecosis is the musical brainchild of Houma, Louisiana's Steve Junot (guitar, vocals). He's joined by prodigious accordion player Chubby Carrier, and Lupe Valdeviez, Jr. (drums) with special guests Waylon Thibodeaux on fiddle and Tony Hall (Harry Connick Jr., the Neville Brothers, Dave Matthews, Emmylou Harris) on bass. Zydecosis plays classic rock standards in Zydeco style, and reminds listeners that Rock N Roll was meant to be fun. Zydeco All Night, the band's debut CD, is good old-fashioned party music. Covers they may be, but at their best Zydecosis restores the spark that these well-worn classics once had.

Zydeco All Night opens with Led Zeppelin's Whole Lotta Love. To be honest this was my least favorite track on the disc, mostly due to the verses (the chorus is very well done). Particularly in the first verse there's a feeling of separation between the vocalist and the instruments that's a bit jarring. Each segment is well done but they just don't seem to mix well on this track. Talk Dirty To Me (Poison) is a whole other matter; this one is a cross of early Elvis Presley (Don't Be Cruel) and Zydeco and works wonderfully well. Aerosmith fans may well bristle at the idea of Walk This Way being interpreted as a Zydeco tune, but once again the song sounds like it was never meant to be anything else. Satisfaction (Rolling Stones) is fairly close to the original in spite of the different instrumentation. Perhaps the biggest treat of the disc is Zydecosis' take on Queen's Fat Bottomed Girls. It helps that Queen themselves never forgot that Rock N Roll was fun and entertaining. This is a song that translates well into most any genre, but Zydecosis seems to have a special affection for this song that shines through in their performance.

Baba O'Reilly (The Who) sounds more like a country arrangement. Junot provides a great vocal but the arrangement lacks the life and energy elsewhere apparent on Zydeco All Night. I Want You To Want Me (Cheap Trick) is presented in a live track with a small but appreciate crowd listening in. The arrangement here just doesn't carry the urgency of the original, or that the song seems to demand. Musically it’s aesthetically pleasing but just lacks the oomph you might expect. Some Kind Of Wonderful (The Drifters) is presented in a sparse arrangement (bass, drums, harmony vocals), adding guitar on the second verse. It's not Zydeco, but is full of the joy that the song's lyrics imply. Your feet will be tapping and don't be surprised if you feel the urge to dance. Zydecosis closes out with Bad Company's Feel Like Making Love in a memorable rendition that might just be better than the original.

Zydeco All Night is an uneven but memorable effort. At the top of their game Zydecosis sounds like one of the best party rock bands there is. Steve Junot is a plus vocalist who's very composed and sings with a lot of heart. Chubby Carrier is inspired on the squeeze box and really drives the album. Most of the songs here are memorable. A few tracks are well done musically but lack the pizzazz or zest heard elsewhere. On the whole, Zydeco All Night is a very welcome project that I recommend.

You can learn more about Zydecosis at www.myspace.com/zydecosis or http://www.zydecosis.com/, where you can purchase a copy of Zydeco All Night. If it’s digital you want, you can download the album from iTunes.
Posted by Wildy at 6:24 AM