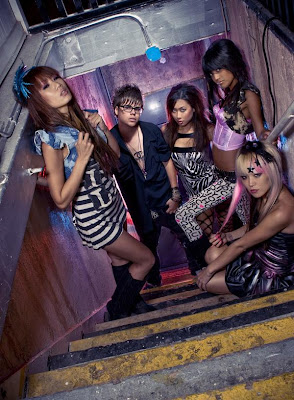 Nylon Pink are the cover girls for a future of music that fits the musical and cultural mores of the moment but will send traditional music fans running for the exits. Formed in Hollywood in 2007, Nylon Pink features Kaila Yu (vocals), Kitt.E.Katt (bass), Jonathan Cathey (drums), Samuel Bluck (guitar) and DJ Shy on turntables. Its Veruca Salt meets The Black Eyed Peas with marketing and merchandising built right into the music. Nylon Pink sent a 3-song self-titled demo for consideration, so let's check it out.

Kaila Yu was something of a celebrity even before forming Nylon Pink. Her MySpace page has over nine million hits and 440,000 friends. Yu has appeared in Stuff, FHM and House of Roses magazines (many on the cover) and was picked by Rolling Stone for their annual Hot List of artists to watch in 2007. With a hybrid sound of Rocker Girl panache and dance club beats, Nylon Pink has a sound that's highly marketable to Pop/Urban radio programmers. The demo opens with Hello Drama, an upbeat Dance/Rocker that also happens to share its title with the line of jewelry Nylon Pink recently launched. It's a commercial in a song. The song itself is shrill and without any real development of ideas. This is perfect material for the dance clubs; bubblegum music with a marketing center. Crack has a dark feel and an incessant dance beat. The vocals are decent, but the melody line that borrows heavily from Nine Inch Nails' Closer and the over-produced sound (including vocal correction work) really detract from the finished product. Lipstick is incessant and urgent in its dance beat, and really never proves to be anything more than a dance beat with lyrics and a marginal representation of a melody.

Nylon Pink is a marketers dream. Cover girl looks from Kaila Yu and Kitt.E.Katt and product representation built right into the songs. The difficulty is that the meat just isn't in the music. I imagine Nylon Pink will do quite well on the club scene, and a short term bit of commercial success wouldn't be terribly surprising, particularly if the band can license a song to a Mean Girls type movie, but the shelf life on a band like this is relatively short, and once the songs go out of rotation they'll likely be forgotten.