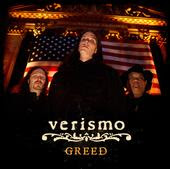 Brooklyn thrash metal scions Verismo are at it again, releasing a four-song EP entitled Greed in advance of their yet-to-be-named full length album due in the Winter of 2009. Together for six years, Verismo has taken the New York City thrash scene by storm. Unusual time signatures, punk energy and a heavy thrash musical core make Verismo one of the most dynamic and original trash bands on the East Coast. Stephan Laboccetta is one of the most enigmatic front men in the scene, and Tamas Vajda and Vincent Cruz create a steady, heavy backdrop that allows him free reign.

Greed opens with the title track, a highly rhythmic piece of Metal/Rock with flashes of pop insouciance. The song is very catchy and a fun listen in spite of the dark tenor it carries. Give It Back is a steady metal anthem that blows heavy and hard without every quite blowing out the equalizers. Houseboy is my personal favorite on the EP; the hardest play and some nice Randy Rhoads inspired guitar work back up an over-the-top vocal. Failure is perhaps the most intriguing composition, playing with time signatures and rhythm variations but perhaps not reaching its full potential.

Verismo certainly has a unique take on thrash metal, treating almost as an art form rather than just an outlet. The musical ability of the band is obvious from the four tracks offered on Greed, and you sense at times they want to let go a little further and branch out into the realms of more progressive metal. Whichever way they go, Verismo is a pleasure to listen to. Obviously if you're not into thrash then these guys aren't for you; but they're worth checking out.

You can learn more about Verismo at www.myspace.com/verismo or http://www.verismetal.com/. You can get the Greed EP absolutely FREE by signing up for Verismo’s mailing list at either their web page or MySpace page.