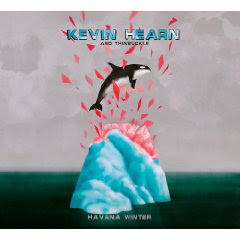 Kevin Hearn would make music if the only instruments available to him were a pair of rocks to bang together. The projects and bands he's either been a member of or contributed to over the years is a bit astonishing. Hearn has played a part in recordings and/or tours for Corky & The Juice Pigs, The Look People, The Rheostatics, Lou Reed, The Tragically Hip, Garth Hudson, Ron Sexsmith, Broken Social Scene and Laurie Anderson, to name but a few. And we should probably mention his regular gig as multi-instrumentalist (primarily keyboard) for Barenaked Ladies. Hearn's quirky songwriting style and distinctive ability to capture bits of pop magic in song has served him well and endeared him to listeners all over the world. Havana Winter, released July 28, 2009, is Hearn's 4th solo album, and third with Thin Buckle (comprised of former Look People alums Chris Gartner - bass and Great Bob Scott - drums; guitarist Brian Macmillan and joined on Havana Winter by Lou Reed guitarist Mike Rathke.) Co-produced by Hearn and legendary Canadian producer Michael Philip Wojewoda, (Barenaked Ladies, Spirit Of The West, The Rheostatics, Great Big Sea, Ashley MacIsaac) Havana Winter furthers Hearn's distinctive songwriting style, dubbed "Planetarium Pop", that combines ambient keyboard elements with more traditional mellow pop songwriting for a musical experience that you don't so much listen to as become part of.

Havana Winter opens with Coma, driven by a distinctive keyboard riff that will keep the song running through your head long after it's stopped playing. Hearn exhorts people everywhere to wake up to the world around them rather than be hypnotized by gadgets, suburbs and the mundane aspects of day-to-day life. The song is a great listen with a wonderfully jarring guitar solo on the fade out. On The Runway is one of those songs that where I don't entirely get the lyrical content but I'm so enraptured with the music it doesn't matter. The lyrics might just be a dreamy rumination on plans, but the lush backdrop Hearn and Thin Buckle have created here is divine. Driven by a lively guitar and bass skeleton, Hearn wraps his keyboard around the song like a vibrant coat of musical colors. On The Runway is one of those songs that the replay button was made for.

Reeling reflects the grief of losing a loved one in poetic and beautiful language. The arrangement Hearn wraps around his memorial is lush and alive, carrying with it the co-mingled energies of memory and love. On first listen I didn't really get this one, but with a more careful ear it's an incredibly powerful and moving song, delivered as always with Hearn's light touch. Luna continues in a similar vein, speaking directly to the one who is gone and includes one of the best lyrical turns of the year, "If you were lost at sea, what kind of a lighthouse would I be?"). In these two songs Hearn displays an incredible ability to take pain and put it into words without beating the listener over the head with his suffering. In poetic and quirky fashion, Hearn communicates the depth of his grief and the depth of his love without getting mired in the sort of negativity that can drag down a song or even an album.

Hearn turns up the metronome on Huntsville.CA, a driven acoustic Brit-Rock tune that will make you want to dance. It's an amusing and lively look at how small, out-of-the way towns most of year can become bustling centers of activity in the summer months. Anyone who's a townie living in the shadow of a seasonal tourist attraction will appreciate the sentiment, and musically it's flat out a great tune (listen in particular for the guitar work throughout the song). In The Shade is a quirky mellow pop-tune with an island influence that equates love with sun exposure, "they'll burn you up in the end". Lush vocals/harmonies and a melodic structure born from another generation of pop music make for a pleasant surprise and a great listen. Havana Winter closes with H.I.T.S. (Helicopter In The Sand). The arrangement here is classic Kevin Hearn, mellow with a lot more harmonic work in the wings that you find in your typical Rock song. Hearn seems to explore the need to chase dreams, and how sometimes even failing to get where you planned gets you where you need to be. The song is highly poetic, deep and subtle, both lyrically and musically.

There's a reason everyone and his brother in the Canadian music scene ends up working with Kevin Hearn; there are few better at their craft. As a songwriter Hearn has developed significantly over the past two decades. He's always going to be a bit out of the mainstream (although he can do mainstream if he wants to), but you'll never walk away from a Hearn album musically dissatisfied. Havana Winter is Hearn's finest work yet; the sort of album you don't want to put down. Kevin Hearn and Thin Buckle should be on your must-listen list. Bet on them making a bunch of year-end lists. For now, Havana Winter is a Wildy's World Certified Desert Island Disc.

You can learn more about Kevin Hearn at http://www.kevinhearn.com/ or http://www.bnlmusic.com/. Havana Winter will hit shelves on July 28, 2009. You can pre-order copies via Amazon.com. Once the album is released you can also pick up copies at Hearn’s webstore. Expect wide digital availability after the release date.
Posted by Wildy at 5:46 AM