Review: Volcano The Bear/La STPO - The Shy Volcanic Society At The Bear And Bird Parade (Split) 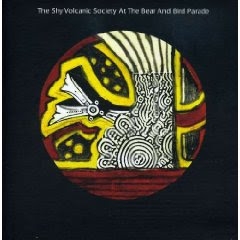 Volcano The Bear is one of the more interesting acts to come out of England is some time, straddling the lines between Experimental and Folk and a form of improvisational technique familiar to jazz fans. Volcano The Bear is almost certainly unique. La STOP may well be the grand-daddy of experimental electronic music in France, with origins as far back as 1984. The band has released a number of EPs/LPs over the years, many with inspiration from great painters or world events. 2009 sees the combined effort of these two bands on one thrilling EP, The Shy Volcanic Society At The Bear And Bird Parade.

The EP opens with Volcano The Bear on Our Number Of Wolves, a song that brings to mind the music written for a funhouse created by Tim Burton; it's more a collection of sounds and notes than a composition of intent. The song does grow into a progressive entity with vocals that sound like they might be provided by an other-worldly litter of cats. The effect is interesting, disturbing and entertaining. The Boy With The Lips Inside opens with an almost aboriginal rhythm that's loosely associated with something that isn't quite a chant and extremely bare-bones instrumentation. We're talking the stuff of dreams here; highly disturbed and medicated dreams. Volcano The Bear closes out with The Open, The Closed, again delving into depths best plunged with a deep understanding of psychosis. La STPO's Death Sleeps In My Ear sounds like background music for a horror movie based in obscure and frightening occult matters, like the scene where some creature of the night is first revealed to the audience after a long and tense build-up. The album closes out with another La STPO tune; The First Circle Is The Eye, which sounds almost Druidic in origin. The composition here is fairly simplistic, with instrumentation that negotiates the concept of harmony without ever quite coming to an agreement in principal. The First Circle Is The Eye is, however, the song with the most traditional structure and form and transcends from a highly aboriginal sound at the start to an almost modern sound with jazz elements built in.

The Shy Volcanic Society At The Bear And Bird Parade is a highly original and unusual recording. Sonically, Volcano The Bear and La STPO will keep you guessing throughout. In spite of the highly disturbing nature of these compositions, there is a sort of coherency that comes out of the three together, almost as if you're being allowed inside the mind of someone who's world view you might never understand; but at least you can sense some of the world as they might see it. Spend a little time with Volcano The Bear and La STPO.