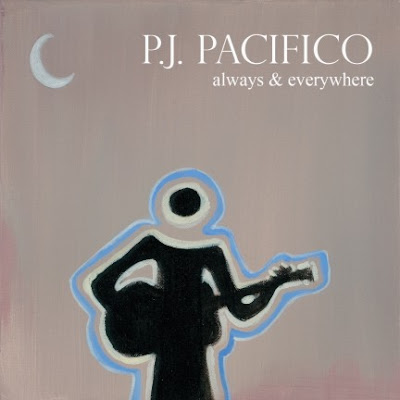 Norwalk, Connecticut's P.J. Pacifico has lived there all his life and yet seemingly hasn't been home in years. He's been all over the US and Canada sharing his music with crowds both large and small, gaining a perspective on the world that informs his songwriting on his second album, Always & Everywhere (available July 14, 2009). Pacifico's voice has been compared to that of James Taylor, although I find him to be a lot closer in sound to the sound of The Paperboy's Tom Landa or Peter Stuart of Dog's Eye View.

Pacifico opens with Batten Down, a quintessential Pop/Rock tune full of great hooks and a strong melody. Batten Down is as catchy as the flu. The Girl From Montreal is a wistful and sweet love song about first loves and the effect they can still have on you years later. The narrator walks away knowing she's happy but still wishing for "one more walk in the snow". Jackbone is about extending a vacation because there's nothing really worth going home to. This was written during a Colorado snowstorm and features The Samples' Sean Kelly on harmony vocals. I'm Home is a finely crafted acoustic Pop tune that matches up well for alternative rock and pop radio.

Pacifico makes a brave choice in covering The Beatles I Wanna Hold Your Hand. Pacifico sticks with the essential melody, but gives the song his own read in a down-tempo, nearly contemplative version that is a pleasure. There's an almost melancholy feel to Pacifico's version but it works well. This one's just Pacifico and his ukulele. Enjoy looks at the benefits of being in a long-standing relationship where you can simply be yourself. The song is charming and well written and a potential classic. First Light is about diving into love with both hands and feet. It's a great song and certainly radio-ready. My favorite song on the disc is Incognito, an expression of faith in a love that's about to be tested by separation. This song is destined for mix tapes as well as for certain licensing for prime-time television (if the folks that select such songs don't catch on to Pacifico's Incognito they don't belong in their jobs). You'll also want to check out I Can't Say No, Easier and Curtain Call.

P.J. Pacifico has an easy-on-the-ears light Pop/Rock sound that's certain to gain him some attention at commercial radio. Don't be surprised to hear several tracks from Always & Everywhere licensed. It's not a matter of talent or quality but of breaks. If the breaks go Pacifico's way he'll be huge. Always & Everywhere is great stuff!

You can learn more about P.J. Pacifico at www.myspace.com/pjpacifico or http://www.pjpacifico.com/. Always & Everywhere will go on sale July 14, 2009. Check out P.J. Pacifico’s website on or after that date for purchase information. Also expect availability through outlets such as iTunes.
Posted by Wildy at 6:03 AM