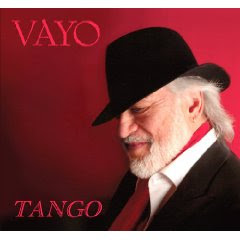 Vayo Raimondo has been successful across twelve albums because he as is true to the heart and history of Tango music as he is to his own individualism. Unlike many Tango musicians Vayo writes and performs his own original Tangos as well as reinterpreting the classics. The Uruguay-born musician has lived in the United States for many years now, but returns home to Uruguay to record each new album with some of the best tangueros in the world. Vayo, who was nominated for a Latin Grammy in 2007 for Best Tango Album, returns in 2009 with Tango.

Tango opens with La Cumparsita, a deliberate, melodic and melodramatic song with dark and mysterious undertones. This is a tremendous start to the album, with a halting; almost unsure beginning that gains presence as the song progresses. Celos (Jealousy) has a lullaby feel, sounding like it might have come from an old Hollywood Western. Soledad (Loneness) has an almost listless feel to it. The song is slow and sad but compelling for the energy that Vayo infuses here with his voice. Daniela is a gorgeous arrangement; contemplative and sweet. The mix of dark (Vayo's voice) and light (the instrumentation) makes for a perfect balance that gives this tune an extra spark. There are a few relatively non-descript songs on the second half of the disc, but Vayo closes out strong with Milonga Sentima! (my favorite song on the disc).

In all honesty I have been exposed to Tango music before, but not quite like this. The Tango I've heard compared to Vayo's music is like Taco Bell compared to a true home style Mexican restaurant. I don't think I'd be able to listen to the old stuff without a very critical ear after this. Tango does suffer a bit on the second half of the disc, but has enough strong material to be worth checking out.

You can learn more about Vayo at http://www.vayoraimondo.com/. You can purchase a copy of Tango at Amazon.com, or download it through iTunes.
Posted by Wildy at 5:00 AM