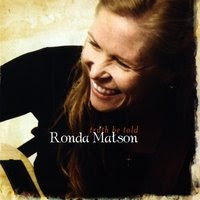 Ronda Matson is one of those performers who put music on hold as life intervened. Marriage, children, and a business all took precedence over time, although Matson continued to write and play in private. Inspired the music of her youth, everything from Mozart and Chopin to Bob Dylan and Simon and Garfunkel, Matson puts wisdom from her life experiences in song to share with anyone who will listen. Her growing legion of fans in New England know what you're about to find out, Ronda Matson it the deal deal. Truth Be Told is Matson's second release, a follow-up to 2006's The First Seven, an EP originally created as a gift for friends that got such a positive reaction she turned it into a commercial release.

Truth Be Told opens with Weight, which sounded suspiciously like 4-Non Blondes' What's Up in the introduction, but opens up into a very powerful and original composition that tracks in at nearly eight minutes. The song is about getting dragged down by the pressures and events that life throws at you sometimes, and is written from a sad perspective that avoids being hopeless. Bonny Call is a song Matson wrote for her daughters, encouraging them to never give up on their dreams. The song is very sweet and has Celtic overtones. Truth Be Told is something of an anti-love song. It's well-written and carries a lot of emotional weight.

Blind is one of the true highlights of the disc, with Matson doing both lead and harmony vocals so convincingly is sounds like two different vocalists, helping Blind soar with an Indigo Girls-style intensity. The song also has a pretty decent pop hook to it which makes it eminently listenable. The World Turns Round is a sweet song that finds Matson in a more optimistic place than on much of the first half of Truth Be Told. It's a song of memory and love that's definitely worth hitting the replay key a few times. In The Day is a song about remembering your own fights and foibles as you watch your children go through the same things, and mourning the fact that most people forget what it was really like. It's an extremely well-written and wise song and worth the price of admission on its own.

There are some strong compositions here, and there's no doubt that Matson is a heartfelt performer, but the presentation is often very heavy to the point of smothering. Matson has a depth of life experience and is very wise as a lyricist, but couches overly descriptive lyrics into somewhat repetitive, traditional-style folk arrangements, creating a listening experience that's somewhat monochromatic and elongated beyond listen patience. This doesn't happen on every track, but it happens often enough to have the potential to turn off some listeners. An artist in the same vein is RJ Cowdery, but Cowdery has learned to temper her descriptive tendencies and sprinkle them with wit. Matson will have her devotees, and does display a certain talent for story-telling, but economy of words is key.

You can learn more about Ronda Matson at http://www.rondamatson.com/ or www.myspace.com/rondamatson. You can purchase a copy of Truth Be Told at www.cdbaby.com/cd/rondamatson2.
Posted by Wildy at 5:00 AM