Review: The New Up - Better Off 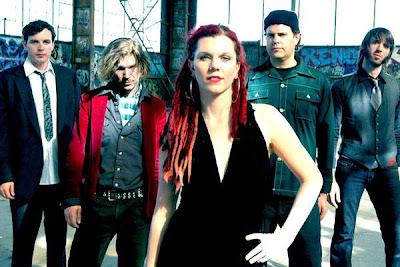 The New Up - Better Off
2009, Evil Cherise Publishing

Occasionally a band comes along where no one can agree who they sound alike. The New Up has been compared to such divergent acts as Radiohead, Journey, Lake Trout, The Talking heads and TV On The Radio. These comparisons aren't entirely off the mark, but none of really strike a careful listener as accurate, either. The San Francisco quintet with roots far to the east (Chicago, Illinois and Charlottesville, Virginia) have managed to craft a sound that sounds a little bit like a whole lot of people and a lot like no one else, which is as close to original as it's possible to get in a medium based on eight notes. The New Up's latest EP, Better Off, will be released on August 18, 2009, and is a follow-up to last year's Broken Machine. Where Broken Machine was a musical elucidation of the problems of the world, Better Off is the beginning of transcendence, suggesting changes that might happen on the personal level that will turn things around. Producer Jamieson Durr (Franz Ferdinand, The Killers, Handsome Boy Modeling School) brings out the best side of The New Up on Better Off, juxtaposing their Pop tendencies with their harder side in a mix that crosses genres with electrifying results.

Lead vocalist ES Pitcher is a front woman in the tradition of Blondie or Gwen Stefani; a big Rock N Roll voice with lots of layers and a very sensuous side that can draw you in before she belts you away. Pitcher also contributes on guitar. The band is rounded out by Noah Reid (guitar, vocals); Hawk West (flute, automation); Dain Dizazzo (bass) and Drew Bertrand (drums, percussion). Better Off opens with Dear Life, a vibrant guitar rocker that shows off Pitcher's pipes in grand fashion. Dear Life is good enough and hard enough to crawl all over Modern Rock radio playlists, but has enough Pop sensibility to cross over. Better Off slows things down a bit in a post-Grunge tune that rocks and grinds its way to self-realization. B!tch has a new wave sheen to it that fits somewhere between The Replacements and No Doubt; the melody line is straightforward but the arrangement builds in a lot of sonic dissonance that keeps listeners on their toes. Not to mention there's a guitar solo here that would sound right at home on a Scorpions album. F.Y.R.U.F.N. is an acronym we can't fully publish, but let's just saw I'm glad I'm not Roger. The song is dark and vaguely disturbed in sonic aspect. Wait (For Danny G.) is a sprawling memoriam in song that just doesn't fit with the rest of the material here, but is included for obvious reasons.

The New Up is on to something out there in San Francisco. The market for bands like The New Up is a narrow one, and many great bands go unheard by anyone who doesn't happen across their MySpace page, but The New Up just might have the right zeitgeist to make it. Better Off makes a distinct impression, with a sound that's derivative yet original, and a vocalist in ES Pitcher who can break down walls with her sound and presence. Don't be surprised if The New Up is a name you hear a lot more of in the future.

You can learn more about The New Up at http://www.thenewup.com/ or www.myspace.com/thenewup. Better Off will hit shelves on August 18, 2009. Keep checking The New Up’s web site for updated release information.
Posted by Wildy at 5:20 AM