Review: Shiftless Layabout - Layin' It Down Eight Days A Week 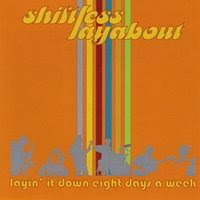 Let's go back to the 1970's for a moment. Platform shoes, fashions folks won't own up to even today and a divergence of musical styles were the way of the world. Bands like the Average White Band, Tower Of Power, Blood Sweat and Tears and Chicago were dominating the charts with funk and/or lots of brass. Thirty-odd years into the future we find Shiftless Layabout, who in June of 2009 released their sophomore CD, Layin' It Down Eight Days A Week. Steeped in the funk of the 1970's and the big brass sound of rock bands of the era, Shiftless Layabout has taken Seattle by storm. Add in a little Southern Rock pedigree and you have the picture of Shiftless Layabout that I'd show you. Now let's talk about the music.

Layin' It Down Eight Days A Week eschews the excesses of the late '70's and 80's and returns to a time when songwriting was still dominant over displays of technical prowess substituted for song craft. Shiftless Layabout shows what they're made of right from the opening moments of Soul Steppin', providing a highly danceable music experience that recalls the joy that was music in the 1970's. About A Drummer is built around Tommy "Two-Tones" Miller's funky guitar work. He and bassist Matty "Good-Times" Wexler do a wondrous dance throughout About A Drummer, keeping the music lively and the vibe cooking. The brass section of Tim "TK" Kelly (also vocals), Brandon "Lunchbox" Keller and Heidi "Chico" Wischler fills out the sound perfectly, while Christian "The Squid" Krehbiel keeps everyone in-line on drums. Crazytown features some of the psychedelic spirit of the 1970's, and glorifies people willing to live their life on the edge. Miller is again superb on guitar. Falling Down reminds me heavily of Chicago, but the energy just isn't here. The Kid On His Own recaptures the energy Shiftless Layabout has been about for much of the album. Feels So Good finds Shiftless Layabout powering up for a bit of electric funk in a highly danceable tune with a sunny disposition. Shiftless Layabout closes out with She's With Me, another energetic, high-end Funk Rocker that's a kick in the brass guaranteed to get you moving and shaking.

Shiftless Layabout is a rather ironic name for a band that plays music that inspires listeners to do anything but stay still. Layin' It Down Eight Days A Week is one of those infectious albums you won't want to put down. The only thing that could make the experience complete is to find it on vinyl. This is great stuff.