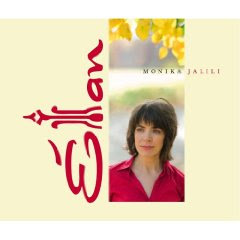 Monika Jalili stumbled into Persian music much the way destiny finds most people; it was something that was never entirely distant from her life based on her background, but took her quite surprise. Jalili was pursuing a career in musical theater when bitten by the bug of Persian music. After starting NoorSaaz with Megan (nee Weeder) in 2004, Persian music filled more and more of Jalili's musical vision. The culmination (thus far), is the album Élan. Jalili takes traditional folk songs of Iran/Persia prior to the Iranian revolution and breathes life into them with readings that mix both eastern and western perspectives. Jalili sings in Persian, Azeri, French and English, and her love of the songs shows through in every note. Many of these songs have been banned in Iran since the Iranian Revolution in 1979, but continue to inspire and move people all around the world. Élan is produced by Jamshied Sharifi, himself a prodigious composer (Muppets In Space, Down To Earth, Harriet The Spy, Clockstoppers), Arranger (Ray Charles, Paula Cole, Dream Theater) and band leader.

Élan opens with Ghoghaye Setaregan (Dance Of The Stars), an uplifting song full of hope and grace. Jalili's voice is eminently beautiful; a full and rich soprano that caresses each note with its texture and tone. Arezooha (Wishes) pulls in some serious Western Influence ala Windham Hill. The acoustic guitar here serving as the perfect complement to Jalili's vocals. This is one of those songs you just won't want to end, and the language barrier won't matter either. You don't need to understand the words to get the wistful hope with a slice of melancholy that pervades the song. As if to balance the western feel of Arezooha, Jalili heads resolutely in the other direction on Gonjeshgake Ashi Mashi. The violin and guitar nearly steal the show on this song, but Jalili owns the stage even on CD.

Ay Rilikh (Separation) is as close to an operatic recitative that Jalili gets on Élan. There's no Wagnerian fire and brimstone, but the emotive quality of the song is startling. The song itself is a thing of beauty, and Jalili draws every ounce of subdued drama and sorrow out into the open in the texture and tone of her voice. Evlari Vaar (To Bemaan) is one of the more interesting songs on Élan with clear Persian roots but an almost Eastern European/Slavic feel to it. The arrangement here is somewhat simplistic but that works to showcase Jalili's voice on a particularly challenging vocal line.

Biya Bare Safar Bandim (Let's Be On Our Way) has an almost Rock N Roll feel to it, bowing to distinct western influence. This is another relatively bare arrangement, relying primarily on guitar, violin and percussion. Peyke Sahari (Messenger Of Dawn) may well be the most beautiful composition on the disc, and finds Jalili in her most lyric vocal line yet. Bia Bia Benshin (Come Sit By Me) takes full control of the Persian scale, making the most of those two extra half-steps. Bia Bia Benshin sounds like it might have stepped right out of a movie or musical. Élan closes out with what must be described as the keynote song of the album, Ay Vatan (Oh, My Homeland). This is not so much a song of nationality as a musical ode to the land where an entire people's roots are driven deep. You'll be moved by Ay Vatan regardless of your nationality, and Jalili's rendition is absolutely haunting.

Monika Jalili comes along with a collection of poignant and beautiful Iranian/Persian songs that predate the Iranian Revolution at a time when the residents of that country are closer to turning back the revolution that binds them than at any point since 1979. Élan speaks to the goodness and yearning for a better life of a beautiful people; one who is striving right now for the freedom to choose their own path. If Jalili's album is reflective of the culture and nature of the people of Iran when free from oppression and fear, then it is an amazing tribute to a national spirit that has been hidden from the world for three decades. Élan is an amazing collection full of beauty, hope and the fragile yet vital strength of the human spirit.

You can learn more about Monika Jalili at http://www.monikajalili.com/, where you can purchase a copy of Élan. The CD is also available from Amazon.com. Downloads are available through iTunes.
Posted by Wildy at 7:04 AM