Review: Willy Porter - How To Rob A Bank 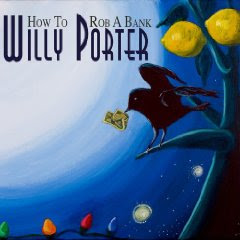 Willy Porter is one of those musicians who mostly avoided the pitfalls of pop success by refusing to play the marketing game and staying true the maverick nature of his muse. As a performer and songwriter, however, Porter is so talented that even refusing to go along with the mores of the moment he occasionally nails popular tastes to the wall and clips a chart or two. Porter's greatest adulation and respect have always come from fellow musicians; folks who really know and understand what it takes to craft the sort of elemental songs that make up Porter's catalog. Willy Porter's latest CD, How To Rob A Bank, is an intelligently stylistic album formed from the raw clay of Americana, Folk and Blues. You'll hear names like Bob Dylan and Woody Guthrie brought up when talking about Willy Porter. The comparisons are apropos.

How To Rob A Bank opens with Learning The Language, a down-tempo Country/Folk tune about emotional maturity. The arrangement here is superb, matching a lyrical acumen that's distinctive ("Yeah I'm learnin', pain comes too quick and wisdom comes too slow"). Colored Lights has a very restrained feel to it, and the lush arrangement gives the whole song a very distant feel, like an experience through a looking glass. I Didn't Bring It Up is a song about starting over. The sense of movement in the song matches the sense of dislocation upon losing a long term relationship, yet the vocal harmonies solidify and ease the listener (and presumably the protagonist).

Hard Place extols the costs of war as scene across three generations. The chorus here is something of a dream-come-true, based in Blues and Folk. Wide Open Mind reminds me a bit of early work of The Black Crowes. Porter's creation is offered in a delicious Blues/Rock arrangement that will stick with you for days. Porter thoroughly outdoes himself on How To Rob A Bank. The song is topical, sounding like a blueprint for the Bernie Madoff scandal; Porter has crafted an intelligent and accessible diatribe against greed and human nature using wit, artistic tenor and a panache that would please fans of Arlo Guthrie. Similarly on Psychic Vampire, Porter captures the essence of someone we've all known at some point in our lives in song. How To Rob A Bank closes out with Barefoot Reel, a down-tempo tune with a melody you could buy a decent loft apartment in lower Manhattan with.

Willy Porter is a distinctive talent; an outsider so good and so true to who he is that the center gravitates toward him. How To Rob A Bank is Porter's best work to date. Expect How To Rob A Bank to dominate year end lists in critical circles, and garner Porter a lot of exposure along the way. This is a special album; a Wildy's World Certified Desert Island Disc. Make sure you check it out.

You can learn more about Willy Porter at www.willyporter.com or www.myspace.com/willyporter. You can purchase a copy of How To Rob A Bank at Amazon.com, or download the album from iTunes.
Posted by Wildy at 5:20 AM