Review: If You Will - Above The Earth 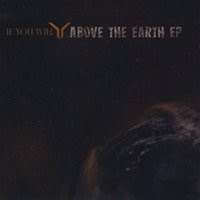 Mahtomedi, Minnesota's If You Will is back with Above The Earth, a five-song EP that serves as a follow-up to 2007's Flight Plan. Seth Lienard (bass, vox), Aaron Rosell (drums, piano, vocals) and Stefan Swanson (guitars, vox) bring five highly personal and emotional rockers on Above The Earth, showing significant growth both musically and lyrically over their debut album. For a band where all members are currently either nineteen or twenty years old, If You Will is maturing quickly into the sort of band that not only has a lot to say but can (and play) it well. Writing primarily from both Christian and Secular perspectives, If You Will manages to create music that is magical and refuses to be pigeonholed into one genre or type.

Above The Earth opens with Satellite, a song about the divisions that carve up humanity and their real source. The song has a vaguely spiritual way but deals with war and peace and reality of the space that exists between peoples and cultures. Ragnarok finds If You Will speculating on the end times in a heavy, guitar driven tune that finds a sense of peace within its own story line. Chloroform & Games is written from the perspective of an abused child. Message-wise it's a powerful song, although the musical development of the song may have been checked a bit by an urge to get the message right, as there are a few awkward moments in the song. If You Will breaks out some serious Blues licks for Time, exhorting listeners to stop worrying about things that do not matter and live their lives. Time finds If You Will hitting on all eight cylinders with four minutes of near-perfection. Above The Earth closes out with Saboteur, a relationship song about being with someone who so completely takes over a relationship they destroy what they love. It's a powerful song; extremely well-written and lyrically dense. If You Will chose the perfect closer here; a song that could easily be a Rock hit and has elements of 1970's classic rock mixed hand-in-hand with Funk and Modern Rock.

If You Will is a special outfit. It's unusual to hear a trio these days create such a full and textured sound as these guys, and the song-writing is generally outstanding. Perhaps what is most significant is that even when If You Will misses with a song it still tends to be highly listenable (just not up to their usual standard). If I were a betting man I'd say If You Will is destined for great things. Their relatively young ages, displayed development and baseline ability speak of a long career full of significant success. For now, If You Will continues to build on a regional following that is not inconsequential while writing great songs that wend their way through a maze of secular and spiritual issues. Oh yeah, and did I mention they rock, too? Make sure you check out Above The Earth. You'll be glad you did.

You can learn more about If You Will at http://www.ifyouwill.net/ or www.myspace.com/iyw. You can purchase Above The Earth as either a CD or download at www.cdbaby.com/cd/ifyouwill2.
Posted by Wildy at 6:09 AM