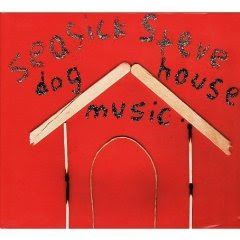 If you live in Europe or Australia you probably already know who Seasick Steve is. For music fans in the New World, Seasick Steve is perhaps one of the most intriguing rags to riches stories of the 21st century. Born in Oakland, California, Steve Wold left home at the age of 14 and never looked back. He's done a bit of everything career wise, from driving Ambulances to picking fruit and even producing records. Even after settling down (Seasick Steve has been married for 25 years) he's continued a nomadic lifestyle; he and his wife have lived in 56 houses in 25 years. Dog House Music was originally released in the UK in 2006, selling over 200,000 copies and landing at #1 on the Indie Charts on three separate occasions. He's been featured on Jools Holland's Hootenany, performed in Royal Albert Hall and even been nominated for a Brit Award for Best International Male along with Kanye West, Jay-Z, Neil Diamond and Beck. On August 4, 2009, Bronzerat Records will release Dog House Music in the US for the first time. Dog House Music is a delicious blend of Blues and Roots music that hasn't lost touch with the darker, seedier side of human nature that is such an integral aspect of the genres.

Dog House Music opens with Yellow Dog, a rambunctious blues-based Rocker that last just a minute but throws down the gauntlet for listeners. This is real down and dirty blues, whether offered in electric form like on Yellow Dog, or acoustic-roots style like on Things Go Up. Seasick Steve sings from a lifetime of experience on the road and on the run, and from the ashes of experience rises a wisdom so raw and pure it shines like the sun. Cut My Wings introduces a three-string guitar held together by duct tape and faith. Seasick Steve uses those three string to concoct a riff so catchy you'll be hitting repeat into the wee hours just to hear it one more time. Dog House Boogie is built on the sort of riff that made George Thorogood famous. The arrangement is simplistic and the lyrics follow suit, but Dog House Boogie will have you reaching for your dancing shoes.

Hobo Low is a catchy blues-based tune about the depths one treads in a life on the run. My Donny gets a little acoustic guitar acrobatics into the mix as Seasick Steve careens wildly enough to run off the rails but never quite leaves the track. My Donny is a fun song that's simplistic but a great listen. Cast Po'Man continues in the same vein as does Salem Blues. Dog House Music closes out with I'm Gone, which may well be Seasick Steve's theme song considering his long life on the road.

Dog House Music is a distinctive record that's probably more unique in the Europe and Australia than it will seem in the US. The move toward traditional blues and roots music has been prevalent here in the states for several years now. Seasick Steve is a personality to be reckoned with, cleaving to the image of a wandering troubadour of old but updated for the 21st century. Dog House Music does suffer from its own consistency a bit, but is an entertaining listen. Make sure you check it out.

You can learn more about Seasick Steve at http://www.seasicksteve.com/ or www.myspace.com/seasicksteve. Dog House Music will go on sale August 4, 2009. You can pre-order a copy at Amazon.com. If you can’t wait until then, you can download the album now through iTunes.
Posted by Wildy at 6:17 AM