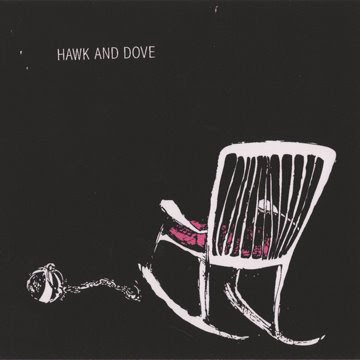 Hawk And Dove is a New York City ensemble propagating a low key brand of Shoe-gaze/Country Psychedelia that's gotten them onstage at such NYC venues as Union Hall and the Bell House (Brooklyn) as well as Piano's and The Cake Shop (Manhattan). Led by vocalist/lyricist Elijah Miller and guitarist John Kleber, Hawk And Dove weave an almost hypnotic series of arrangements around Miller's angst-filled lyrics. Joining Miller and Kleber are Stephanie Sanders (bass), Dave Butler (drums) and Rachel Lyon (violin). The Rocking Chair EP will be followed by a full-length release in the Fall of 2009, but that's not enough for Hawk And Dove. They recently filmed a pilot written by Side Car, a comedy troupe from New York City's Upright Citizens Brigade Theater that will debut at the 2009 New York City Television festival, and are in the process of writing a rock opera.

The Rocking Chair EP is only three songs strong, giving just a taste of what this quintet is capable of. The EP opens with Furious Armies, a hypnotic piece of shoe gazing Alt-Country mired in neurotic self-doubt. The melody line is monotonous, true to the overall sense of the song, which is full of deeply repressed anger. It's actually an intriguing listen, but you really have to pay attention. The song is smart in a neurotic, overly descriptive fashion, but casual listeners might not get it. It almost has an R.E.M. meets Radiohead quality to it. Stain is an incredible song about the extremes people go to fill a sense of emptiness in a world full of things, events and happenings and too short on real human contact. Even in the contact of a relationship, Stain implies that people often fake those connections to have someone rather than be alone. The violin and bass seem to play out this parable in the breakdown section, playing a duet that's more like playing simultaneously than playing together. The plaintive country feel to the song implies a passivity that fits with the theme. The Rocking Chair EP closes out with Boy On The Moon, and goes back into the droning aspect heard on Furious Armies. I honestly couldn't say I drew a specific meaning from this song. It's a curious composition that's not without merit; I just wasn't entirely sure what to make of it.

Hawk And Dove has an interesting sound they're working on The Rocking Chair EP. From the three songs presented here, I'd say they're a band that is likely to develop a fiercely loyal core following. Casual listeners will be at a loss, because Hawk And Dove is a band you really need to dig into to get. The dramatic and powerful lyrical flow and narrow dynamic range here fares best when punctuated by the violin work of Rachel Lyons and the musical heartbeat of Stephanie Sanders' bass work. The songwriting is intelligent and occasionally quite obscure. The Rocking Chair is an intellectual EP with a surreal, psychedelic bent that will reward careful listeners.

You can learn more about Hawk And Dove at www.myspace.com/hawkanddoveband or http://www.hawkanddovenyc.com/. You can purchase a copy of The Rocking Chair EP at Hawk And Dove’s web store using PayPal.
Posted by Wildy at 5:10 AM